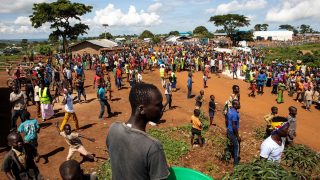 The Uganda Police Force has charged and remanded a British man, Sam Little, for treating people including infants with toxic industrial bleach. Little worked with a self-acclaimed American based pastor to extensively peddle a fraudulent treatment known as “miracle mineral solution/supplement” or MMS to Ugandans claiming that it cured different diseases including malaria, cancer and HIV/AIDS.

25-year-old Little was charged alongside three Ugandans; Tim Tom, a pastor at Fort portal Christian fellowship, and herbalists Samuel Albert and Samula Tadeo. “They were charged with two counts under the National Drug Authority and Authority Act for carrying out illegal clinical trials and supplying of impure drugs,” said Fred Enanga, spokesperson for the Uganda Police Force.

Little was promptly arrested following a report by the Guardian in May exposing his callousness of giving MMS to about 50,000 Ugandans through a network run by US-based Robert Baldwin of the Global Healing Christian Mission. He and his cohort face a 10-year jail term and a fine of UGX5 million($1,351) if found guilty of distributing impure drugs.

“We want to remind the public that any mixture or drug without a prescription should be considered dangerous and must be avoided. We encourage those who still have the mixture to hand it over to the nearest police station and visit a registered medical facility for review,” Enanga said in a statement published on the police website.

The statement also says that samples of the miracle cure retrieved from the NDA and Government Analytical Laboratories contained a dangerous corrosive toxin that is harmful to human consumption.

Both Little and Baldwin had said that their field study, which is the distribution of MMS, would not be allowed in the UK or US as both countries have very strict laws against it, hence the move to Uganda. The US Food and Drug Administration (FDA) has issued a public warning asking people to stop consuming MMS. Consumers of MMS have turned up with really bad symptoms that can be life-threatening.

According to the Ugandan authorities, other suspects involved in the sham of a network who are at large are still being hunted.