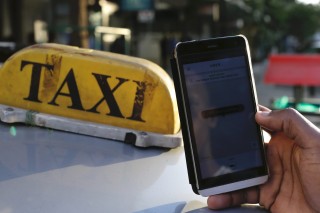 Online taxi hailing app, Uber, having launched in Accra Ghana last week, has signed its first Standard of Understanding (SOU) in Africa with Ghana’s Ministry of Transport. This is in order to develop holistic policy guidelines for taxi hailing operations in the country. This development makes Accra the 467th city in the world to offer Uber services.

“The SOU is a fantastic first step for Ghana to become a smart city of the future and shows the critical role technology will play in creating thousands of economic opportunities for Ghanaians as well as assisting in reducing congestion on roads,” said Alon Lits, the General Manager for Uber sub-Saharan Africa.

What the SOU offers

The agreement is a follow up on the ongoing talks surrounding growing the shared economy and the benefits of efficiency and competition in the form of increased choice and lower costs of transport for Ghanaians.

Under the SOU, Uber will partner with the ministry to produce a regulatory framework that allows for ride-sharing technology and also regulates its use and adoption by riders, drivers and companies that use it to find business.

“The first market will probably be South Africa and we are pushing to make that happen before the end of the year,” said Alon Lits, Uber’s general manager for sub-Saharan Africa.

‘Everything’ is Uber’s strategy to build on its logistics infrastructure in the cities it operates. Once the company is at full scale in a city with ride passengers, it can develop other services such as UberRush, which is available in Chicago, Los Angeles, New York and San Francisco.

Over the years, logistics has been a major issue for e-commerce shoppers and on-demand businesses in major African cities. This is due to bad road networks as well as traffic congestion. As a result of these challenges, many e-commerce companies have invested more on logistics in order to meet the demand of their customers. This latest plan to delve into food delivery and courier services, comes at a time when e-commerce shoppers and on-demand businesses are grappling for a solution to the delay associated with the delivery of goods.

Following Uber’s expansion to the West African city of Accra, the company also commenced operations in the city of Dar es Salaam in Tanzania. This makes Tanzania Uber’s eighth African country after South Africa, Nigeria, Kenya, Egypt, Morocco and Uganda (where it launched a few weeks ago).