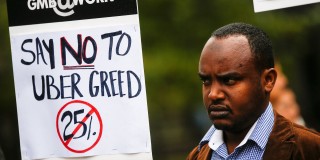 Uber taxis are being burnt in Kenya

From lawsuits and government restrictions, to protests, renowned online cab-hailing company, Uber, is no stranger to controversy. Since the beginning of the year, the company has been under fire in Kenya for operating a cheaper business model thereby, driving traditional taxi operators out of business. Recently, the brewing tension has escalated to major heights as Uber taxis are being set ablaze in Nairobi, and Mombasa, Kenya.

Earlier today, four men attacked and badly beat up an Uber driver, before setting his car on fire. This happened in the Riruta area of Nairobi where the driver had gone to pick up a female customer, but once he arrived the destination, four men emerged and vandalised the car before torching it. And the driver barely managed an escape through a window. Today’s arson attack is the second in a month for Uber.

On the 22nd of February, an Uber taxi was burnt in a very similar fashion in the Kilimani area of Nairobi. The driver was said to have been dropping off a customer when he was ambushed and attacked. A car had blocked the taxi on the road while the occupants walked out with a jerry can of petrol, beat up the driver and then set his car ablaze.

Last month, members of the United Kenya Taxi Organisation (UKTO) gave the government a seven-day ultimatum to ban Uber from operating in the country, threatening a strike action and street demonstrations if their demands were not met. Before then, Uber drivers suffered regular harassment and attacks from disgruntled traditional taxi drivers who say the online taxi company is hampering their business. Uber taxis were vandalised on several occasions causing the company to place its drivers on high alert, asking them to operate with caution.

Although the Kenyan government turned a deaf ear to the demand of UKTO, and has refused to send the San Francisco-based taxi company away, a committee has been formed to draft new laws that will regulate online taxi operations in the country. In reaction to these arson attacks, Reuters reports that Uber South Africa has emailed a statement saying the company  is in “open dialogue” with the police over the attacks, even as traditional taxi drivers operating under the UKTO deny responsibility for the attacks.

Due to the number of anti-Uber protests in several countries around the world, the company has actually been banned in countries like Spain and India. And as things get uglier in Kenya, the government might be forced to toe the same line as Spain and India and place a ban on Uber operations in the country.

Watch video below for more: