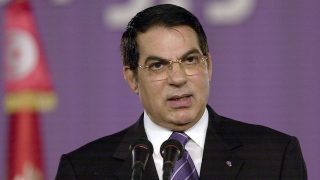 Ousted Tunisian leader, Zine El Abidine Ben Ali died in exile in Saudi Arabia on Thursday 19th September 2019. The 83-year old had been in intensive care in a hospital for three months after battling prostate cancer for years.

The former leader’s body was being transferred to Mecca, where he was to be buried today (Friday) according to his last wishes, Ben Salha told The Associated Press.

In January 2011, Ben Ali fled the country after Tunisians rose up against his autocratic rule in a revolution that triggered other uprisings abroad known as the Arab Spring.

The protest also led to a democratic transition at home and on Sunday, Tunisians voted in an election contested by 26 candidates from across the political sphere. Two political outsiders won to advance to a second-round runoff vote.

“Tunisians themselves – if this most recent election on Sunday is any indication – have moved on from the Ben Ali regime,” Leo Siebert from the United States Institute of Peace told Al Jazeera.

A former security chief and prime minister, Ben Ali became Tunisia’s president and ruled for 23 years. He seized power in 1987 after he declared president-for-life Habib Bourguiba medically unfit to rule.

During his time in office, Ben Ali opened up the economy in what led to rapid growth. He was credited to have promoted his country of 11 million people like a beach haven for European tourists and a beacon of stability in unstable North Africa.

At the time, there was a better quality of life than in nearby countries such as Algeria and Morocco. But his tenure was marred by a lack of civil rights, little or no freedom of speech, inequality, and accusations of corruption, and Ben Ali stifled all forms of political dissent.

During that era, his photograph was reportedly displayed in every shop, school and government office from the beach resorts of the Mediterranean coast to the impoverished villages and mining towns of Tunisia.

Ben Ali’s rule was put to the vote a few times. He faced only nominal opposition and won re-election by more than 99 percent but his reign ended in 2011 after mass protests. He then fled to Saudi Arabia.

“Tunisia has firmly moved into democracy and to multi-party politics, and the death of Ben Ali spells kind of an important end for autocracy in Tunisia,” Siebert added.

However, many Tunisians are reported to be economically worse off than they were under Ben Ali eight years on from the uprising. But they have enjoyed a much smoother march to democracy than citizens of the other Arab states that joined in the uprising in 2011.