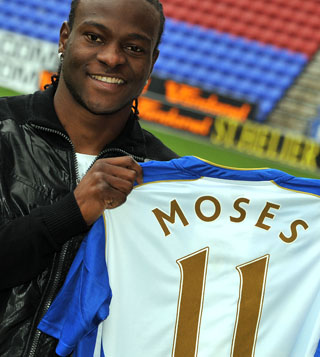 Nigerian international and Wigan Athletic striker Victor Moses is on the wish list of current European Champions Chelsea if latest reports are anything to go by.

Wigan chairman Dave Whelan says he has turned down a bid for the Nigeria as he feels Chelsea are trying to take advantage of Moses’ contractual position.

Moses has a year left in his deal with Wigan and has so far refused to sign a new contract with the Lactics.

In a chat with ESPN, Whelan said: “They made a bid at 6pm last night (Monday) and we turned it down flatly. Chelsea would need to get realistic before we would even listen to them.”

According to ESPN, Chelsea’s bid is in the region of 4 million pounds but Wigan value Moses at about 10 million. However, the Wigan chairman insists the club do not have to sell the striker since he would still command a fee next year even if he doesn’t sign a new deal.

“We don’t need to sell him with 12 months to go on his contract because he is 24 so wouldn’t be going on a free transfer.”

“… Moses needs another year or two before moving to a club like Chelsea. He needs games and he wouldn’t be first choice at Chelsea, I would have thought.”

In a related develepoment, Mali captain and Barcelona midfielder Seydou Keita wants to remain with the Catalan club and says his dream is to finish his career at the Nou Camp.

Interestingly, Keita has two years left in his contract signed in 2008 when he joined the Pep Guardiola revolution from Sevilla.

However, a clause in the contract stipulates that the 32 year old can leave for free if he fails to play 50 percent of games for the Blaugrana.

But indications from Spain suggest new Barca boss Tito Vilanova is desperate to keep the holding midfielder with Keita now expressing his readiness to keep playing for the Catalans.

Speaking to Spanish newspaper Mundo Derportivo, Keita said: “I am yet to speak with the club to sort out my future, but I want to continue; this is my desire. I would like to retire at Barcelona, so I hope that can be the case.”

With the 32 year old possibly going for free if he wants to, it is no wonder Italian side AC Milan as well as rich-spending Malaga are willing to snap up the Malian; but Keita insists his “family is happy in Barcelona.”

The Malian was signed from Sevilla in 2008 for a reported 14 million euros and has made 19 appearances for the Barcelona scoring 16 goals.