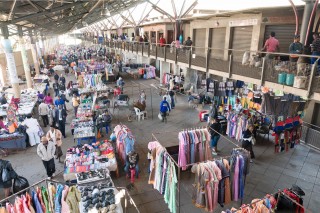 Trade is key to ending poverty in Africa

One of the major goals before world leaders now is ending global poverty. According to The World Bank and The World Trade Organization estimate, one billion (15 percent) of the world’s population remain in extreme poverty, and of this number, 415 million are concentrated in Sub-Saharan Africa. Trade can change this.

Africa continues to remain vastly unexplored. Making the continent’s most remote regions accessible for trade will not only promote prosperity in those regions, but also elevate the continent’s continued growth path.

“While countries need to continue to establish better trade relations with international partners, enabling trade routes within the continent can yield numerous benefits for the region and its people,” says Charles Brewer, Managing Director of DHL Express Sub-Saharan Africa, while commenting on The Role of Trade in Ending Poverty, a report jointly written by the World Bank Group and World Trade Organisation.

The report emphasized the role that international trade plays in development and poverty reduction in Africa, noting that the value of trade is measured by the extent to which it delivers better livelihoods, measured through higher incomes, greater variety of choice and a more sustainable future, among others.

According to Brewer, connecting rural areas to trade opportunities is a key focus for DHL Express in Sub-Saharan Africa. “We have made great progress in making the global market and the world at large more accessible and connected by increasing the number of points where customers can access DHL and our global network. We now have over 4,500 retail outlets across Sub-Saharan Africa offering DHL services. ”

Access to new services has transformed Africa both economically and socially, says Brewer, citing DHL’s 37-year experience on the continent during which the logistics company has explored the remotest parts.

Trade is a key enabler of growth in developing countries, according to the report. Lower trade costs and fewer barriers between countries is vital to eliminating extreme poverty.

To effectively reduce poverty, growth needs to be inclusive, and poor people aren’t often located where growth takes place, Dr Kim adds, while making a case for more connectivity. “We must always connect the poorest to trade opportunities.”

“Trade plays an essential role in driving private sector-led growth and job creation and can be a powerful force in reducing poverty and increasing incomes,” the World Bank president adds.

Africa is making progress in growing internal trade. This is evident in the number of successful trade blocs on the continent. However, more needs to be done. “There needs to be a collaborative effort between the public and private sector to work together to ease doing business across borders,” Brewer notes.