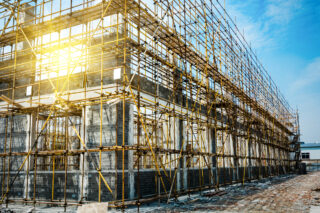 From solar fields to refineries, investment in all types of infrastructure is a crucial tool for development. We have seen this happen in developed climes like America, Germany, Britain, China etcetera. In Africa, it is different, and not so much has been done regarding it. There is a vast infrastructure deficit on the continent which has continued to hinder its economic growth. The African Development Bank (AfDB) says that the continent needs $130–$170 billion annually for its infrastructure needs.

The African population is ballooning, and it is imperative that available infrastructure commensurate population growth. People need to have access to reliable power, faster internet, good transportation, and industries for accelerated development. These infrastructures contribute significantly to human development, poverty reduction, and the attainment of short and long-term development goals.

Thanks to both natural and human resources the continent harbours, Africa is fast becoming an investment destination zone for investors. The continent is changing, and it is beginning to see the erection of various state-of-the-art infrastructures across different regions.

In this article, we list some high-rated infrastructural projects in Africa with a huge economic impact on its people.

Despite being a country with a vast deposit of oil resources, Nigeria has been through loads of fuel crises. Worse still, the country pays a fortune to refine oil internationally and import fuel to its citizens for cheaper consumption. In August, fuel subsidy paid by the government exceeded $1 billion reinforcing long-standing conversations about its unsustainability.

The $14 billion refinery is to herald a new dispensation of economic gain. Of Africa’s daily petroleum demand of 4.3 million barrels per day (mbd) 57 per cent is locally produced on the continent while 43 per cent is imported. Dangote Oil Refinery is expected to lessen this import dependence by as much as 36 per cent. Dangote Oil Refinery Company Limited said it can process 650,000 barrels per day of crude oil. Additionally, the refinery would create over 100,000 direct and indirect employment opportunities.

The refinery is the largest single-train refinery in the world and Africa’s biggest oil refinery. With its operations, the pressure on the nation’s currency will reduce as there is an expected significant forex inflow. These product and service offerings make it one of the top infrastructural projects in Africa.

The COVID-19 pandemic is one of the recent testaments to why Africa must start manufacturing its vaccine. The continent experienced wide-scale vaccine inequality during the pandemic. By the end of 2021, more than 92% of Africa’s 1.2 billion residents had not received complete vaccinations against COVID-19.

Also, the continent of over 1.2 billion people still imports 99% of its vaccines and consumes 25% of the global vaccine supply. This is not sustainable as African descents now have to rely on foreign countries for health security.

The need for pharmaceutical autonomy spurred the establishment of a vaccine manufacturing facility – Madiba. The $80 million project was funded by the Institut Pasteur de Dakar and the European Investment Bank (EIB). The facility is expected to significantly reduce Africa’s dependence on imported vaccines and support equal access to vaccines.

When the new facility is operating at complete capacity, it would produce up to 300 million vaccine doses each year for the continent.

With just 22% internet connectivity, Africa remains significantly behind other world regions. Over time, this has impeded the growth of its digital economy. As part of its $1 billion commitment to improving internet access to more Africans, Google landed its subsea cable Equiano in Togo. The digital initiative has a direct impact on not only internet connectivity in the country but also its economy. This makes it one of the top infrastructural projects in Africa.

An economic impact assessment of Equiano in Togo from Africa Practice and Genesis Analytics estimates that the subsea cable will add approximately 37,000 new jobs between 2022 and 2025 and increase Togo’s economic output by an additional USD 351 million during the same period.‌‌

Equiano is now running through Nigeria, Namibia and South Africa. It would also accelerate economic growth with the GDPs of Nigeria rising by $10.1 billion, South Africa by $7 billion and $260 million in Namibia. During the same time, Equiano would indirectly create 1.6 million jobs in Nigeria, 180,000 in South Africa and 21,000 in Namibia.

Nigeria is an energy-poor country, with about 62 per cent of its citizens lacking access to electricity. The country requires 30,000 megawatts of electricity to meet its demand but generates below 6000 megawatts (MW). The energy problem birthed the Zugeru project power plant – an hydroelectric power plant under construction in Niger state, Nigeria.

The $1.3 billion Zungeru project is one of the biggest power projects in Africa to secure preferential loan facilities from the Export-Import Bank (Exim Bank) of China. At full capacity, it would generate 700 megawatts of electricity to become the second-largest hydroelectric power project in the country.

Beyond the purpose of power generation, the plant will also provide flood control, irrigation and fish breeding facilities to host communities. Over 2,000 people would also be employed with the project.

Fertiliser is essential to the global food system, especially in achieving food security in many parts of the world. This use case alone has spiked the importance of ammonia, an inorganic compound of nitrogen and hydrogen. With a current value of USD 78.26 billion, the Ammonia market is projected to surpass around USD 129.63 billion by 2030. So there is an available robust market.

To tap into the market, Hive Hydrogen and Linde plc have teamed up to establish the world’s largest green ammonia export plant in South Africa. With a production capacity of over 800,000 tons/per year, the $4.6 billion plant would generate about 10 000 jobs. It will be powered by a nearby solar farm and will get its water from a local table salt factory that desalinates seawater.

The production of ammonia involves fossil fuels and is responsible for 1.8% of global CO2 emissions. But with renewable energy, green ammonia can be manufactured, slashing the carbon footprint of agricultural production.

Nigeria still has one of the lowest fertiliser applications on the continent at 20kg per hectare, lagging behind peers like Egypt and South Africa. With the establishment of the Dangote Fertiliser Plant, another one of the top infrastructural projects in Africa, this is about to change.

The $2.5 billion fertiliser complex is built on a 500-hectare expanse at the Lekki Free Trade Zone in Lagos, with an expectation to deliver 3 million metric tonnes of urea fertiliser per annum in its first phase.

As Nigeria’s fertiliser need is anticipated to reach between 5 to 7 million metric tonnes in coming years, the company hopes to bridge an 80 per cent supply gap currently covered by importation. It is estimated that the fertiliser plant would contribute $400 million in foreign exchange earnings to the economy through exportation. These benefits make it yet another top infrastructural project in Africa.

The ambitious Grand Ethiopian Renaissance Dam (GERD) is one of Africa’s biggest infrastructure projects in Africa. The $5 billion dam, built on the Blue Nile is to provide electricity for Ethiopia and help lift its teeming population out of poverty. The finances for the project were solely funded by Ethiopia, with 20% of the project financed from bond offerings to citizens and 80% from tax collection.

It is the largest dam in Africa, generating around 6,000 megawatts of electricity for domestic use and export. This turns  Ethiopia into Africa’s biggest hydroelectric exporter. The project will generate 15,760 gigawatt-hours of electricity per annum for about 60% of the Ethiopian population living in the dark.

On another end, several controversies have trailed its construction. Because the new dam puts the management of the flow of the Blue Nile into Ethiopia’s hands, a power shift has come into play in the region. A country like Egypt – a historical guardian of the Nile, is now at the mercy of Ethiopia which controls the flow of the water body. A vast majority of the Egyptians survive on the Nile for water which supports agriculture, and regulation of the water body now threatens their livelihood.

Nigeria has six main ports, but the bulk of waterborne trade rests on just one of the seaports – Apapa port in Lagos. Consequently, congestion in this port stalls the free flow of goods and services. Widespread congestion at Nigerian ports cost the country $55 million (N20.8 billion) per day in 2020. Unsurprisingly, the Apapa port accounts for a large portion of this cost.

The need for an alternative port to decongest the Apapa port and attract bigger vessels for trade gave rise to the $1.5 billion Lekki Deep Seaport. Its capacity to handle four million metric tons of dry goods annually cements its status as one of the top infrastructural projects in Africa.

Upon full operations, it would cut ship waiting times by 50 to 60 per cent. In July, the delivery of three Super Post Panamax Ships to Shore (STS) Cranes and 10 Rubber Tyred Gantries (RTGs) for its operations. The project would bring $201 billion in revenues to federal and state governments through taxes, royalties, and duties.  Through its operations, the port project would create over 200,000 jobs.