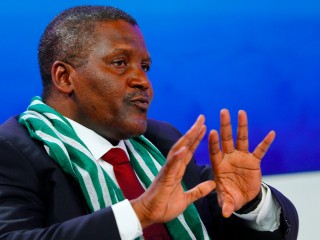 The African Report in a series of articles has released its top 100 most influential Africans. Out of these continental leaders, a total of 28 Nigerians are acknowledged for their potency in their different roles.

The list consists of top Nigerians who control the levers of power across politics, business and arts. They are models of the heights of African leadership in the world, both at home and in the diaspora.

The top 10 Nigerians on the list start with a dominating Aliko Dangote. He is the richest black man in the world and Africa’s wealthiest. With an estimated wealth of $10.3 billion, the billionaire is the founder and chair of Dangote Cement which is the largest cement producer in Africa.

Chimamanda Ngozi Adichie, the Nigerian novelist, and multiple award-winning writer comes in second. She doubles as a feminist campaigner, inspiring women all over the world to speak up and stand up for their equality. In the words of her renowned fictional predecessor, Chinua Achebe, “Adichie came almost fully made”.

Next on the ranking is David Adedeji Adeleke, popularly known as ‘Davido’. The Naija pop idol set the new record as the most viewed Nigerian artist on Youtube with over 500 million views and is estimated to be worth $16 million.

Enoch Adejare Adeboye who is the General Overseer, the Redeemed Christian Church of God (RCCG) follows up in fourth place. He is the highest-profile Pastor in Nigeria and his counsel has been sought by presidents. He has numerous honorary doctorates from many institutions in Nigeria and abroad. Pastor Enoch Adeboye has also been honoured both in the secular and religious arenas.

Iyinoluwa E. Aboyeji, the ‘Entrepreneur in the Public Interest’ falls in sixth place. He gave his first TED-talk as a teenager and co-founded two successful startups in Africa before launching Flutterwave in 2017. With $15.7 million in funding, the payments company is empowering Pan-African merchants to execute business on a global scale, processing $1.2 billion in transactions so far.

At number seven is Ayodeji Ibrahim Balogun popularly known as Wizkid. He went platinum after his collaboration with Drake, signs upcoming artist in his label and even charges over $12 million to appear in concert. He was the youngest African artist to get a Grammy nomination and is the first African artist to bag seven billboard nominations, amongst numerous awards.

Arriving at number eight is Mike Adenuga, the second-richest entrepreneur on the continent of Africa.  He recently funded the building of the Alliance Française in Lagos and was rewarded with a Légion d’Honneur, the highest civilian award by French President Emmanuel Macron.

Dr Ngozi Okonjo-Iweala comes in at number nine on the list. The former Nigerian Finance Minister and Harvard-educated developmental economist is currently the board chair of the Global Alliance for Vaccines and Immunisation (Gavi) and was appointed to Twitter’s board of directors in January.

The last Nigerian on the top 10 list is the former President of the Federal Republic of Nigeria, Olusegun Obasanjo. “OBJ” is Africa’s most famous backseat driver. The doyen of Nigerian politics has had an impact on every presidential election of the past 40 years and his blessing makes or breaks political careers. He is also one of the wealthiest businessmen in Nigeria.