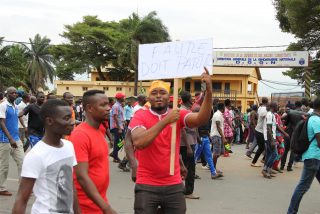 For Togo, removing a 5o-year-old legacy was always going to be hard work. Thousands of people in the small West-African country marched through the streets of its major cities last week as they demanded President Faure Gnassingbe step down. Businesses came to a standstill, people took to the streets clamouring for an end to the “Gnassingbe dynasty.” The Togolese Government responded by shutting down internet access throughout the week, costing its economy almost $300,000 per day.

Removing the dictator and his family

The demonstrations have been called “unprecedented”: it’s the first major move to oust Faure Gnassingbe and his family. Faure became president in 2005 after the death of his father Eyadema who had been president for 38 years. Faure was installed as President of Togo with the support of the Togolese Army and to the dismay of the people.

After some pressure, he stepped down to grant himself some legitimacy by contesting in the presidential elections in April 2005. He eventually won the election albeit with some controversy. He won a third term in office in April 2015 with 60 percent of the total votes, defeating main challenger Jean Pierre-Fabre. The election was described as fraudulent by EU observers and the Carter Centre. Protests against the election led to the killings of about 1,000 people by Togo’s security forces.

It’s 2017 and Togo’s people haven’t given up. The next election is in 2020, and while Gnassingbe hasn’t indicated if he would run again, there are suspicions that he would not step down. Presidential term limits in Togo is nonexistent, removed by Faure’s father in 2002. If Faure refuses to step down in 2020, he would join the likes of Joseph Kabila and Pierre Nkurunziza who did the same after their presidency expired.

Though the origin of these protests look questionable, since they were organised by a coalition of opposition parties who have vested interests, the turnout was probably proof that it is a genuine popular uprising. Pictures of protesters across cities in Togo, and also in neighbouring countries Ghana and Gabon were shared on the Twitter and Facebook. This in a way helped to mobilize and co-ordinate protesters. “We’ve shown the world that we’re peaceful people,” a post on Twitter read, “All we want is change.”

We’ve shown the world that we’re peaceful people. All we want is change. But since war has been declared on us, we’ll fight our ennemies pic.twitter.com/tMAB1p9MXd

However, the internet shut-down by the Togolese Government during the protests last week exemplified the latest ways of authoritarian repression in Africa.

Internet shutdown as a tool of repression

The right to internet access as recognized by the UN, under its human rights laws, is a right being denied many Africans in recent times. Since early 2016, there have been almost 20 internet shutdowns across Africa, all at the behest of the respective federal governments. For Togo, earlier protests in August resulted in the death of two people and 13 more were injured.

The failure of Togo’s authoritarian government to get people to stay at home after that, as evidenced by these recent protests, has prompted the internet shutdown. Togo’s government shut down the internet to make it impossible for people to organize. But organize they did, questioning the relative overestimation of internet protest mobilization, as opposed to traditional means of mobilization.

In other African dictatorships, internet has been shut down for different reasons ranging from preventing the co-ordination of opposition members during elections as was done by ex-Gambian dictator Jammeh, to preventing protests from people segregated in their own countires (the Anglophone Cameroonian revolt earlier this year and the Oromo people protests in Ethiopia last year.) Other African countries that have shut down their internet in recent times include Gabon, Chad, Morocco, Egypt, Libya, Democratic Republic of Congo, Algeria.

The internet embodies one of those factors that can’t be controlled in dictatorships. And what one can’t understand, one disparages. Cameroon’s long serving dictator Paul Biya called it “a new form of terrrorism.” Mugabe called the internet a “tool of British imperialism.”

However, the economic loss incured by the shutdowns in Africa (the Oromo protests drained millions from the Ethiopian economy) indicate that the internet is a major part of the economy on the continent. It is also a life-changing device that has been weaponised by governments. Greater than these however is the fact that the internet is a medium of expression. Hence, any threat to freedom of speech and expression, through internet shutdowns, is an infringement on human rights.

The UN has called for the president to “respond to protesters’ expectations” by placing a cap on constitutional terms, limiting it to two. ECOWAS, regional bloc of West Africa and which Faure Gnassingbe chairs, has yet to release any statement regarding the protests.