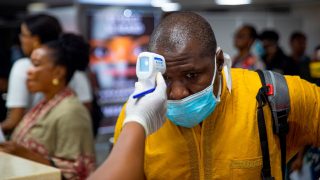 To beat COVID-19 in Africa, we must find a balance

When Ebola exploded in West Africa in 2015, communities across Africa worked together to contain the disease and learned firsthand the importance of acting early. Although they faced myriad challenges, governments and their partners were able to form an organized effort to successfully contain the virus. Today, we face a new and devastating pandemic in COVID-19.  And as countries around the world issue strict stay-at-home orders and shutter their economies, there’s debate across Africa about whether to simply import these measures or to forgo the most extreme restrictions.

This is a false choice. Countries can find a balance, fighting COVID-19 and also preventing the hunger, impoverishment, and instability that could result from hasty, one-size-fits-all implementation of public health and social measures. But to do so, leaders must make decisions based on data and in partnership with communities. The Partnership for Evidence-Based Response to COVID-19 (PERC) recently conducted surveys in 20 African nations to better understand how their people are facing the crisis, and the findings can further inform decision-making.

Compared to the United States and parts of Europe, which hesitated to act while COVID-19 spread stealthily and now have exploding caseloads, African countries benefited by acting early. But in the longer-term, low- and middle-income countries face their own grave challenges, due to the prevalence of poverty and the stretched resources their governments can commit to the COVID-19 response.

COVID-19 is a dire threat for tens of millions of people. Nearly 50 million Africans are over 65 and hundreds of millions more have pre-existing conditions that could put them at risk of severe disease. Just as other countries facing surges of infection have seen healthcare workers and police officers infected with the virus, front line health workers in Africa will be endangered if their countries don’t, work to “flatten the epidemic curve.”

We know from our success fighting Ebola that working with communities to find local solutions is a powerful tool for halting transmission. But countries shouldn’t merely recreate measures that have been successful elsewhere. Africa has unique challenges to implement even the most “low cost” of prevention measures. In the PERC survey, 59% of respondents said they lack the physical space needed to isolate sick people, and while 41% said they washed their hands or used hand sanitizer 10 or more times the previous day, it’s known that across Africa about three-quarters of people lack access to basic hand-washing facilities.

Like many African cities, Freetown, Sierra Leone is densely populated and a majority of people live in crowded informal settlements. Anyone who has actually spent time here knows how challenging physical distancing will be in such cramped quarters. Furthermore, half of residents live below the bread line and 47% don’t have running water, so we can’t advise everyone to regularly wash their hands without also helping them find a means to do so.

In Freetown, the Freetown City Council helped informal settlements install rainwater harvesting units and hand washing stations, which will improve hygiene now and improve resilience in the long-term. Community outreach teams are moving across the city, engaging with residents to provide information and learn about new challenges that arise. The Council will also now start to work with public markets so they could facilitate physical distancing while continuing to operate, since many residents rely on them for daily sustenance. We can’t delay, but we need to act carefully and think creatively.

Governments are also responsible for closing the gap between protocols and practice. In the heat of an outbreak, a plan proposed in a government situation room may be wildly different by the time it is executed in a village miles away. In the worst-case scenario, imposing measures by force can cause more harm than they prevent. If enforcing a lockdown results in more deaths than the virus itself would have caused, our efforts would have been a failure and our strategy needs to be rethought.

Stay at home orders mean economic hardship. With the knowledge that some essential measures will make life difficult, particularly for vulnerable people, governments in Africa need to be thoughtful in how to mitigate those harms. PERC survey respondents may have already been considering these potential hardships, with three in 10 respondents opposing the closure of marketplaces and, on average, estimating that they would run out of food in 10 days. Freetown is taking action through its urban farming intervention, which will see the distribution of pots and seeds so vulnerable residents living in informal settlements can do some backyard farming, working to reduce hunger and strengthening community resilience. The Freetown City Council is also phasing the delivery of property rate demand notices so that the financial burden of the poorest residents will be alleviated.

It is also crucial to engage with trusted community leaders and adapt measures to the local context. For example, while most survey respondents said they trusted information from the government, respondents ages 18 to 25 were less likely to do so (61%).  Partnering with community leaders in non-government sectors could be a useful adaptation to reach younger demographics.

Africa won’t find the right balance by guesswork or instinct: these decisions require data. Governments must regularly monitor a variety of information, including health, social and economic data, and use that holistic view to adapt their response. Governments also need to draw on lessons learned through the experiences of other countries, and rely on tailored resources, such as the research recently published by our partnership.

Africa has a choice. Working with real-time data, governments can learn which measures are needed to slow the spread of the virus without causing crippling social and economic harm.  Let’s build off Africa’s early, decisive actions against COVID-19 and show the world that Africa can lead in finding the balance.

Yvonne Aki-Sawyerr is the Mayor of Freetown, Sierra Leone.

Amanda McClelland is the Senior Vice President of Prevent Epidemics and Resolve to Save Lives at Vital Strategies where she leads a team working to accelerate progress to make the world safer from the next epidemic.