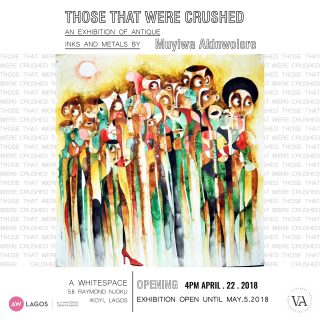 Those That Were Crushed – A visual commentary on Nigeria’s political landscape by artist, Muyiwa Akinwolere

Art means quite a number of things to different people but to Nigerian contemporary artist, Muyiwa Akinwolere, art is a tool, a gift that has the capacity to amplify voices and make the supposedly invisible, visible, which is exactly what he is doing with his works.

Most of Akinwolere’s works explore the nature of human behaviour; love, joy, pain, selfishness, selflessness, and addresses societal issues and trends in politics, religion, and culture, all of which are expressed via figurative characters.

In two weeks, on the 22nd of April 2018, Akinwolere’s new body of work, Those That Were Crushed, a visual commentary on recent happenings in Nigeria’s political and social landscape, will be showing at A WhiteSpace. In the series, the artist addresses unemployment, democracy, terrorism, population explosion and the national economy.

“I have lusted after the idea that our humanity will prevail over the attendant evil that threatens the earth. But, in the face of what we are experiencing regarding security I have come to terms with certain realities”, Akinwolere says of this body of work. “Those That Were Crushed is a sort of mirror to reflect a collective direction that we are headed as a form of self-expression”, he adds. 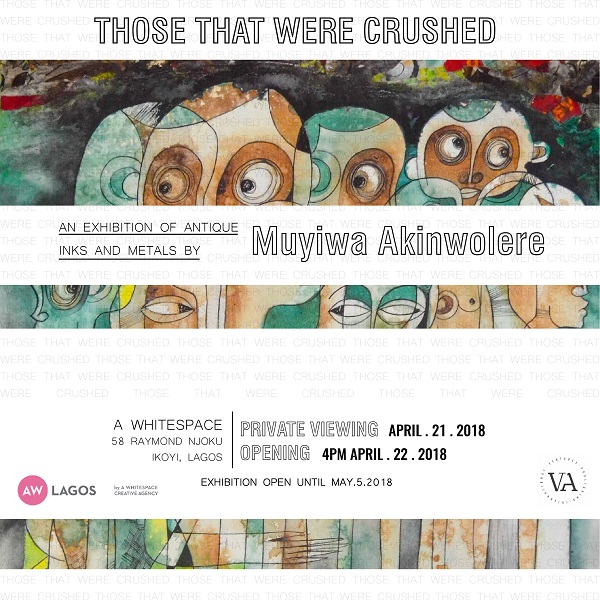 Akinwolere often expresses himself via his signature medium, painting with antique ink. Other times he works with pastel, acrylic, oil and a combination of other materials. However, for this body of work, he toes a different path. Those That Were Crushed is different from his other works as it is the first time he experiments with soft metals and recyclable materials. “I wanted to use materials in such a way that I could convey meaning about my preoccupations.”

On what people should look forward to at the exhibition, Akinwolere says, “I hope the art will mirror my feelings about how much subversive politics and deliberate lack of structures is costing Africa. I hope people will not only be entertained but be challenged.”

Muyiwa Akinwolere studied art at the Obafemi Awolowo University, but his consciousness as an artist began during his days in Osogbo, Osun state after he came in contact with the works of Twins Seven Seven and Susan Wenger.