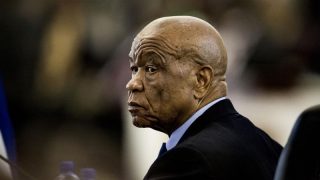 Lesotho’s Prime Minister Thomas Thabane has given in to pressure to step down over evidence allegedly linking him to the murder of his late wife, Lipolelo Thabane. Thomas Thabane’s party, the All Basotho Convention (ABC) party says he decided to resign as a result of recent allegations.

The 58-year-old Lipolelo was entangled in a difficult divorce before she was shot dead while traveling home with a friend on the outskirts of Maseru on the eve of her husband’s inauguration in June 2017. Shortly after this, Maesiah got married to Thomas Thabane.

The murder case of Lipolelo Thabane was brought back into the limelight last week by a letter dated 23rd December 2019 from Holomo Molibeli, Lesotho’s police chief after Thabane tried to suspend him over a separate matter. It claimed that communication records from the day of the crime picked up Thabane’s mobile phone number.

The police are still yet to trace Thabane’s current wife, Maesaiah Thabane, who failed to appear for questioning on January 10 and has since been missing.

The minister of Water Affairs and the government secretary have also been summoned to provide information on the case.