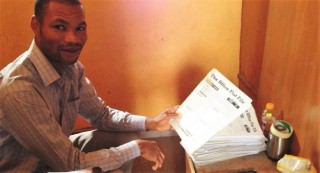 This Nigerian man plays cupid for people living with HIV

“People with HIV are still people and somebody must look after them.”- Ugochukwu Michael

Ugochukwu Michael has taken on an unusual job. Although laudable, but unusual still. The 45-year-old is playing cupid by matchmaking people with HIV in Nigeria. Michael set up his agency four years ago after he experienced, first-hand, the discrimination against people with HIV, and how lonely and isolating their lives can be.

His work as a volunteer for a Catholic organisation led him to work at a state hospital where he witnessed nurses being reluctant to attend to or be close to HIV-positive patients. Seeing that made him aware, and so he encouraged the patients to assist themselves. “…Since they all had one thing in common,” he told Reuters. There he conceived the idea for the matchmaking service but didn’t launch it until the insurgency in Damaturu forced him to move to the capital city of Abuja.

After several attempts to get government agencies to invest in his idea failed, Michael decided to forge ahead with his initiative anyway. He went out late at night hanging banners in the streets of Abuja to advertise his initiative. And when his banners got taken down, Michael started spray painting his ad on boards, walls, and fences. “HIV+? Need wife or husband?” his ads read, with his number at the end.

Michael’s phone rings and beeps non-stop as calls and text messages flood his phone; from HIV positive people looking to get hitched to people who just call to scorn. “Strangers call me to express disdain for my work… they accuse me of encouraging promiscuity,” Michael said.

Michael ensures that his clients are registered with a hospital, undergo regular medical check-ups, and are on their antiretroviral drug. According to him, it’s too risky to match make people who are not on a regular treatment. He also offers free counselling sessions, condoms, and pamphlets on HIV to his clients.

Michael has about 7,000 clients, age range from 19 to 72, a good percent of them, women. While he offers free services to the unemployed, he charges a one-off fee of 2,000 Naira for people who work. Through his initiative, Michael has been responsible for a good number of marriages.

Despite the enactment of the HIV/AIDS Anti-Discrimination Act in March this year, some 3.5 million Nigerians living with the virus are still discriminated against. And according to Michael, most HIV patients are still in the dark when it comes to treatment, “The enlightenment is not just there,” he said.