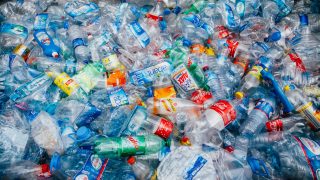 Over the years, plastics have continued to pose a great environmental hazard. According to estimates, people around the world throw away almost four million tons of trash every day, of which 12.8 percent is plastic, polluting land, air and water. In fact, plastic thrown into landfills contaminates the soil and groundwater with harmful chemicals and microorganisms. These bottles could end up in lakes, rivers and oceans, chocking the ecosystem and in turn leading to the extinction of some aquatic species.

Considering the increase in poor disposal of plastics, it has become important to take measures to combat this problem by understanding the consequences of plastic in the ecosystem. This is why in 2017, the government of Kenya banned the use of plastic bags in the country. The UN reported that supermarkets in Kenya alone were using 100 million plastic bags a year.

In an effort to recycle plastic bottles and reduce the environmental effect of the material, two Kenyans; Davis Oduor and Mary Wanja, have turned the Gioto dumpsite and Ndarugu River in Nakuru to their raw material factory.

From the mountain of garbage and polluted river, the two collect bottles, craft them into impressive shapes and paints them. The end results of these plastic bottles are flower vases, lampshades and candle stands which are later sold and used for interior decoration.

Mr Oduor who started his business in April 2018 with a capital of Sh6,000 now earns between Sh250 to Sh1,000 a piece depending on the sizes of the product. Recently, he sold over 50 pieces of his vases to a wedding planner which fetched him more income and encouraged him to work harder.

Ms Wanja crafts beautiful lampshades from plastic bottles which she collects from Wangige market in Kiambu. She sells hers for about Sh1,000 to Sh2,000 depending on the size and designs. “I don’t mind what people say about me when they see me going poring through trash to collect the bottles. I am self-driven and my family has been supportive of my creativity,” she says.

This duo is not only innovative about conserving the environment but also hope to open a décor shop and train more youths in the craft. They believe the government can help reduce plastic pollution by creating more public awareness campaigns to encourage recycling.

Also, in an innovative way to clean the environment from plastics, a group of Kenyan craftsmen collect plastics dumped at the beaches of Lamu islands and use them to build boats.