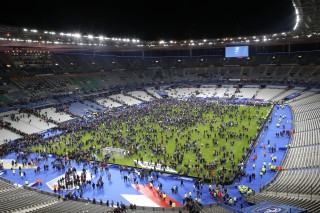 This is what we know about the terrorist attacks in Paris

The world was shocked yesterday evening when explosions and shootings were reported in Paris, France. The attacks, termed a ‘piecemeal World War 3‘ by Pope Francis, has claimed 127 lives thus far and took place during a friendly football match between the national team and Germany. While details are still unraveling, this is what we know, and the questions, which still remain unanswered.

The attacks took place at six separate locations in the city

The attacks which were reported late Friday evening occurred during a friendly between the national team at Germany at the Stade de France. The other five locations were: Rue de Charonne, Boulevard Voltaire, Rue d la fontaine au roi, Rue Alibert and Bataclan concert venue.

127 people died in the attacks and over 200 people were injured, 99 critically. Most of the victims died from the mass shooting at the Bataclan concert venue, where witnesses say the terrorists yelled ‘For Syria.’

ISIS has claimed responsibility for the attacks

Through a statement on twitter, ISIS claimed responsibility for the attacks, reports The New York Times. The Islamic State claims this is in response to France bombing Syria. The organization also called the attacks “the first of the storm” and concluded by stating “Let France and those who walk in its path know that they will remain on the top of the list of targets of the Islamic State, and that the smell of death will never leave their noses as long as they lead the convoy of the Crusader campaign, and dare to curse our Prophet, Allah’s peace and blessings be upon him, and are proud of fighting Islam in France and striking the Muslims in the land of the Caliphate with their planes, which did not help them at all in the streets of Paris and its rotten alleys. This attack is the first of the storm and a warning to those who wish to learn.”

French President Francois Hollande has called the attacks “an act of war” and has also declared a state of emergency.

Belgium has made arrests relating to the attacks

A car with Belgian registration plates, seen close to the Bataclan concert hall has been associated with the attacks and several arrests have been made in Brussels near the suburb of Molenbeek, BBC reports.

al-Assad has suggested that France’s involvement in his country’s civil war led to the attacks, which occurred yesterday. “Wrong [policies] adopted by Western states, particularly France, toward events in the region, and its ignorance of the support of a number of its allies to terrorists are reasons behind the expansion of terrorism,” said Assad, reports the Washington Post.

African leaders have expressed their solidarity to France

Nigeria’s President Buhari condemned the attacks as “dastardly and heinous terrorist attacks on innocent civilians in Paris” reports Premium Times. Through a spokesperson, Kenya’s President Uhuru Kenyatta has also expressed “[deep] shock and [anger] for these attacks.” South Africa’s foreign affairs spokesman also stated, “South Africa stands firmly with the rest of the international community in its condemnation of attacks targeting innocent civilians. Terrorism in whatever form and from whatever quarter cannot be condoned,” reports RFI.

Questions we still need answers to: