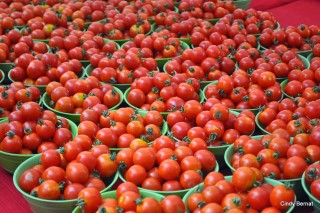 The Dangote Farms Tomato Processing Factory announced that it has halted operations in its $20 million tomato paste facility due to a scarcity of tomatoes, barely two months after beginning operations. This announcement comes as a surprise to many that believed Dangote was the reason for the tomatoes shortage plaguing Nigeria. The tomato plant was anticipated to help reduce wastage of the fruit in the country and to also minimise the amount of imported tomato pastes in the Nigerian market. According to Nigeria’s Ministry of Agriculture, Nigeria produces about 1.5 million tons of tomatoes a year, but over 900,000 tons is lost to rot.

Nigerians have been severely affected by the scarcity of tomatoes, which is a key ingredient in most of the delicacies prepared in this part of the continent. The price of the fruit has increased by 400 percent; Nigerians now pay around 200 Naira for the same quantity of tomatoes which was sold at 50 Naira few months ago. But while there have been different rumours concerning the tomato scarcity, the real reason for the scarcity is a devastating pest attack which has affected this year’s harvest. A pest known as Tuta absoluta has reportedly affected tomato farms in Jigawa, Kaduna, Kano, Katsina  and Plateau states.

Tuta absoluta is also known by the common name tomato leafminer or the South American tomato moth and has been spreading rapidly across the world from South America, where it was first discovered. It has the ability to destroy a whole tomato farm within 48 hours and is also very difficult to control as it has a high mutation capacity with the ability to develop a resistance to insecticides. Around this time last year, farmers in some parts of Nigeria recorded losses as a result of this same pest attack but the consequences of this attack weren’t reflected in the price of the commodity because the demand for the crop wasn’t as high as it is now.