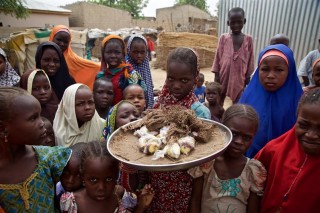 “On a bed at the female ward of the University of Maiduguri Teaching Hospital laid a 15-year-old girl in an evidently bad state. Her face and head were bandaged, leaving slits through which only a bruised eye and swollen lips were visible. On her body were clearer signs of trauma, with burns running from her neck down to the lower parts of her body. Around her bed wafted a foul smell, which a nurse who came to attend to her attributed to a septic wound in the girl’s skull,” Charles Dickson wrote in his article published on ICIR website.

The story above is the fate of many children who are either raped in camps for Internally Displaced Persons (IDPs) or trafficked by the people who are supposed to be protecting them. These children, and millions of other people who are in camps like this, were displaced by of the insurgency in the Northeastern part of Nigeria.

Currently, in Nigeria, there are thirteen IDP camps with Borno, Maiduguri LGA hosting the highest number of IDPs. As of June 2016, there are about 2,066,783 IDPs in Abuja, Adamawa, Bauchi, Benue, Borno, Gombe, Kaduna, Kano, Nassarawa, Plateau, Taraba, Yobe and Zamfara State.

There has also been a slight reduction in the number of IDPs recorded in June in comparison to the figure recorded in May. A development caused by the fact that a lot of IDPs returned to their previous local government areas in Borno state. One camp was also closed down in Damaturu, Yobe State, at the request of IDPs who wanted to return to their villages.

According to reports, a majority of the population in IDP camps are women and children.

Over the past few years, there have been several reports about a hundred young girls being trafficked from IDP camps, this doesn’t speak well of the country. The infographic below reveals how children in IDP camps across Nigeria are being trafficked.