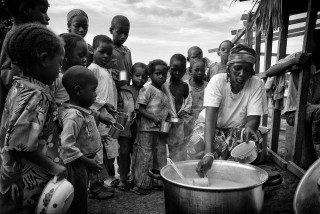 According to a new report by UNICEF, the number of child refugees around the world has increased by 80 percent in the last 5 years. These children are looking for a new home free of conflicts, poverty, extreme weather and are looking for a better life.

Africa has experienced several wars and conflicts. These have led to a high number of children refugees. In Africa, eight countries have experienced conflicts in the past five years. These countries are Côte d’Ivoire, Central African Republic, Libya, Mali, Nigeria, Democratic Republic of Congo, South Sudan and most recently, Burundi.

Roughly one-third of all refugees around the world under UNHCR’s mandate originate from and are hosted by Africa. Approximately 5.4 million refugees come from African countries, and children are disproportionately represented among them. An estimated 53 percent of all African refugees are children – that is, nearly 3 million children.

Five of the largest refugee populations in the world are in Africa – Ethiopia, Kenya, and Uganda. Hosting countries take the responsibilities of immigrant countries and this affects the economic and social status of the destination countries. Seven out of the ten countries with the highest number of refugees relative to national resources are African, led by the Democratic Republic of the Congo, Ethiopia, and Uganda.

In some host countries, the cost of maintaining refugee camps and the social pressure by the citizens threatens the re-displacement of refugees. In May, Kenyan authorities announced plans to close all its refugee camps. Kenya hosts the world’s largest refugee camp, Dadaab. It’s uncertain when the government is going to execute this plan. If undertaken, more than 600,000 people could be displaced yet again.

One out of every five child migrants lives in Africa. About three-quarter of all child refugees are from only 10 countries. Of these countries, 5 are African- South Sudan, Democratic Republic of Congo, Central African Republic, Sudan and Somalia.

Here’s what you need to know about these countries:

About 1.1 million Somalis have been forced out of the country – half of them children – due to over two decades of internal conflict. Another estimated 1.2 million people are internally displaced within the country. The activities of the terrorist group, Al-Shabaab, in the country has led to the destabilization of families, destruction of properties, displacements of citizens. Severe malnutrition has intensified food security concerns in the country while outbreaks of polio, measles and cholera are an additional threat to children’s lives. Aggravating floods in the southern central regions and droughts in Somalia has intensified both international and internal displacement.

Children are more disproportionately affected by displacement in South Sudan than nearly anywhere else in the world. In 2015, 65 percent of all refugees from the country were children.

The tussle for leadership in South Sudan between Salva Kiir and Riek Machar descended the country into a civil war. Many women and children, who are lucky not to have been killed in the conflicts, have migrated to Ethiopia, Uganda and other countries.

In just five years of existence, South Sudan has been plagued by violence. As of 2015, 800,000 South Sudanese were refugees and another 1.7 million were internally displaced. Between January and July of 2016, the number of refugees in the country had increased by at least 130,000.

Children and families have been forced out of Sudan in search of safety, food security, better education, healthcare, and shelter. The secession of South Sudan from Sudan, internal conflicts and violence in Darfur, the Kordofan states, Blue Nile and Abyei regions have driven about 600,000 Sudanese out of the country. By 2015, 400,000 child refugees had left Sudan. Within the country, 2.1 million children under the age of five suffer from malnutrition.

The ongoing civil war in the Central African Republic has led to instability within the country. The civil war in the Central African Republic began in 2012  and led to a disruptive removal of President François Bozizé’s government in 2013. Roughly half a million refugees have fled the country, of which 58 percent were children. In 2015, another 450,000 people had been displaced within the country. High child mortality rate, food insecurity and the prevalence of domestic violence has affected the fleece of people from the country.

The Democratic Republic of Congo

By 2015, 300,000 children refugees had left the country in search for better education, food, shelter, and security. This was caused by wars and outbreaks of violence. About 6 million lives have been lost to embroiling violence in the country. As of 2015, 1.5 million Congolese were internally displaced and an estimated 300,000 has been added in 2016. It is estimated that 2 million children in the country are acutely malnourished. At least, 3240 groups have been recruited as Child soldiers by militant groups.

“In 2015, African countries hosted 4.8 million refugees,nearly one third of all refugees under UNHCR’s mandate”

“Migration is an expression of the human aspiration for dignity, safety, and a better future. It is part of the social fabric, part of our very makeup as a human family, said, Ban Ki-Moon. The stability of African countries could lead to lower migration, better respect for human dignity. Displacements in Africa have led to multiple cases of malaria, hunger, poverty and waterborne diseases, malnourishment and deaths. Urgent Interventions need to be made to prevent further occurrences of forced migrations. Peace and stability are required for Africa to advance development in the respective countries.