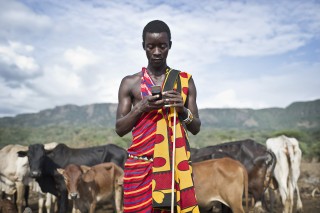 These 10 apps will boost agriculture in Africa

With an estimated income of more than $100 billion annually, agriculture remains Africa’s largest economic sector. Agricultural production in Africa continues to increase gradually and is almost at par with South America. However, as Africans become more tech savvy, innovations are on the rise as technology experts turn their attention to creating mobile solutions for the modern farmer.

Analysts have shown that by 2025 half of Africa’s population will have internet access with about 360 million smartphones on the continent. Also based on their estimation, internet technology could increase annual agricultural productivity in Africa by $3 billion per annum.

Throughout the continent, farmers, NGOs and scientists are developing solutions to boost agriculture and make the business of farming less labour intensive. Here are some of the apps that seek to solve these problems, while also changing the face of agriculture within Africa.

Created by a Kenyan farmer, this SMS and voice only mobile app sends prompts to farmers to collect and store milk within the days of a cow’s cycle. Farmers are also sent information on the best dairy practices. This app runs on all mobile phones.

A Scotland based tech company – Cojengo, in partnership with Microsoft created Vet africa. The app which is popular in East Africa is used to diagnose livestock disease and suggest suitable medications for farm animals. The app also helps farmers monitor and record animal data.

With over 7,000 registered users, M-Farm updates farmers on current prices of goods across the country. It provides a networking platform to connect to other farmers in order to sell their goods in larger quantities. The app also connects local farmers directly to suppliers without middle men and gives significant discounts on fertilizers and seeds.

According to Dr. Kala Fleming, EZ farms app is aimed at aiding entrepreneurs who are investing in small scale farming and those who live in urban areas, far away from where their farms are located. Designed by water research scientists at IBM research-Africa, the EZ farms app delivers up-to-the-minute insight about current and predicted soil moisture levels to farmers and water providers on smart phones.

Agro-Hub was developed by a Cameroonian business venture of the same name whose main goal is to make ‘Cameroon’s agricultural market work’. In order to achieve this goal, Agro-Hub explores joint community effort, SMS and the internet to source, manage and disseminate information on anything pertaining to agriculture.

Created in 2011, Cocoa Link is a mobile technology application that delivers practical information from agricultural experts to farmers in English and local languages at no cost. This technology is available in Ghana, the world’s second largest cocoa producer, and has over 100,000 users.

Kilimo Salama provides farmersw with up-to-date and full climate data via text message. Farmers that are connected to this app also receive information on ways to increase productivity, ensure food security and also protect their crops during bad weather.

This app enables farmers to receive specific information on crop growth, soil and other general questions through SMS. Created by the Backpack farmers in Kenya, the app is supposed to help farmers grow better crops by employing environment-friendly techniques.

Farmers in Botswana are able to track their farm records, cattle herds, farm costs and sales with the Modisar desktop application which run both on and offline. In addition, Modisar sends advice to farmers on animal vaccinations, feed and nutrition also, they receive instructions on finance via text messages. This app won the Orange African Social Venture award in 2014.