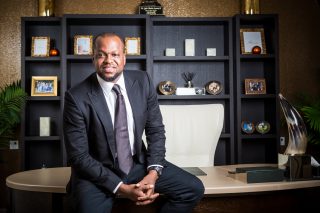 Nigeria is the proud bearer of countless individuals whose steps have rang, as Tennyson’s Ulysses, ‘far on the ringing plains of windy Troy.’ May the 17th was the 45th birthday celebration of one of these individuals, and the spotlight is just right enough to chisel out a fitting profile.

Igho Sanomi (actually Igho Charles Sanomi II) is the renowned businessman, philanthropist and public speaker who has in recent years enticed the world’s attention to the smarts and quickness of mind that is native to the people of Delta State. Having emerged on the global corporate scene as a young visionary of note and the Founder and Chairman of the Taleveras Group, Sanomi’s name is a badge of distinction and accomplishment.

Igho Sanomi dove into the corporate pool long before he clocked the climactic 30. It was during this time that he worked at Cosmos Oil as an Executive Director, and milestone after milestone by negotiating fuel-oil exports from the Port Harcourt refinery. It is with this sort of experience—and an innate thing for the oil and gas sector—that he crafted the Taleveras Group from his numerous business activities in 2004, and has since grown it into the stellar energy-trading company it is today.

Curiously, although Sanomi’s business interests revolve around oil, power, logistics, telecommunications, the maritime industry, aviation and real estate, he studied and earned a Bachelor’s Degree in Geology and Mining from the University of Jos, Plateau state.

Sanomi’s philanthropy, for the most part, follows from the influence of his parents, as well as natural inclination. The result of this is a long list of non-profit enterprises and ventures, all primed towards aiding others from one disadvantage or the other, financially and health-wise. Along these lines, Sanomi is the CEO of the philanthropic Dickson Sanomi Foundation.. One of the more recent of Sanomi’s philanthropy is his demonstration of goodwill towards bowel cancer research in the United Kingdom. This is the reason behind the rousing recommendation that echoed all around the world, just over a year ago: Sanomi was praised for his continued sponsorship of the Bobby Moore fund and Cancer Research UK—and his raising more than $1.5 million for the Fund through his Taleveras company. At 45, the world celebrates an achiever, a considerate oilman, and a magnet of regard and esteem: Igho Sanomi.