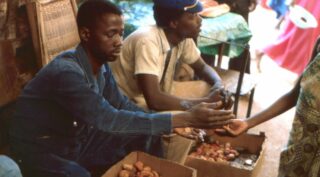 The World Bank expects all West African countries to grow in 2023, except one

2022 was a generally rocky year for West Africa, but it had a few bright spots. Just as it was recovering from the pandemic’s hard blow, a war started in Ukraine. And thanks to hyper-globalisation, the region bore a large portion of the consequences.

Then, several countries went through a cost-of-living crisis. Nigeria and Ghana hiked their interest rates several times, hoping to tame runaway inflation. But it didn’t work. Instead, it got worse. Ghana’s cedi became the world’s worst-performing currency. Also, in Sierra Leone, protests broke out in response to a strained economy. And Nigeria had its worst flooding in decades.

But now that a new year has started, everyone wants to know what lies ahead. And since we can’t practically rely on crystal balls, we listen to analytical projections. This time, we’re looking at the World Bank’s forecasts for some West African countries.

Firstly, it matters that we start from a global perspective. There isn’t much optimism about the global economy for 2023. According to Bloomberg’s December 2022 survey of economists, there is a 70% chance of a recession in 2023. And the World Bank shares the same sentiment. That is why it slashed its global growth forecasts from 3% to 1.7% for 2023. But the extent to which the world’s events affect Africa’s economy is pretty uncertain because the continent has a relatively divergent nature.

That said, here’s what the World Bank thinks about some of West Africa’s largest economies’ prospects in 2023.

“You’ll grow as long as your name is not Nigeria.”

The World Bank expects western and central economies —except Nigeria— to expand this year. These economies will grow at 5.0% in 2023 and 5.6% in 2024 (up from 4.2% in 2022). It projects that Nigeria’s economy will slow down to 2.9%, stating that the country is suffering from “an underperforming oil sector.” Last year, Nigeria’s oil output was so low that it fell behind Angola and Libya. More so, Africa’s largest economy is still in the middle of a fuel scarcity crisis that might drive inflation higher.

Meanwhile, the grass seems greener in other countries. The World Bank is most optimistic about Senegal, whose oil and gas sector is thriving. “After slowing to 4.8% in 2022, growth in Senegal is projected to jump to 8.0% in 2023 and firm to 10.5% in 2024,” the World Bank stated. If this happens, then next year’s growth will surpass the country’s historical high of 8.9% recorded in 1976.

Senegal expects to earn $1.4 billion in oil and gas revenue by 2025, with the Greater Tortue Ahmeyim gas project producing 7.5 million tonnes of liquefied natural gas in its first and second phases. Its first gas project is coming onstream by the end of 2023. Also, the country’s export portfolio has improved because of a surge in private investment in its mining sector.

In Côte d’Ivoire, the economic growth for 2023 is projected to bounce back from 5.7% in 2022 to 6.8% in the new year. Notably, the cocoa-rich nation has been pushing to become a major oil producer by 2023. Last year, it announced that it discovered new oil and natural gas that would boost its reserves by 25%.

The World Bank’s report also projects Cameroon to grow modestly by 4.3% in 2023 and 4.6% in 2024, powered by “investment and private consumption.” There is no data yet on how much investment Cameroon attracted in 2022, but portfolio investment reached a new record in 2021.

Off the mark or not?

It’s notable that the World Bank’s projections, like many others, aren’t always accurate. That is one of the reasons it makes regular adjustments to its forecasts. Again, forecasting is the economists’ equivalent of crystal ball gazing, with probably as much (if not lower) success in predicting the future. Arguably, even the World Bank does not care about being spot on. We can say that because the institution never reveals its forecasting model, making criticism uneasy for others.

I was going to show whether their previous projections for these countries were accurate. But then I realised that the World Bank, IMF and other organisations have been wrong so many times about developing countries, developed countries and even the world at large. One examination of IMF growth forecasts for India found that the margin of error varied from 10.5% to as much as 46.8% between 2006 and 2013.

But that’s not enough reason to dismiss these projections. The numbers might not be great, but the outlooks for many developing nations are usually worth the concern, especially in Africa. For instance, the World Bank predicts  that “In Sub-Saharan Africa, which accounts for about 60% of the world’s extreme poor, growth in per capita income over 2023-24 is expected to average just 1.2%, a rate that could cause poverty rates to rise, not fall.” While this estimate is questionable, the World Bank is citing that governments need to avoid sinking deeper into debt. There’s truth in that. China had to waive debts for 17 African countries last year. Ghana also announced a debt default while seeking an IMF bailout.

So even though no one knows the future, it’s important that governments pay attention to the problems within their reach: debt, inflation, infrastructure, etc.