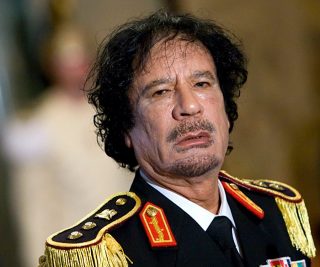 The whitewashing of Muammar Gaddafi

Last week, CNN released a special report about modern day slave trade in the North African country of Libya. For years, Libya has served as a passageway for illegal immigration into Europe and America. In the past year alone, hundreds of people have died trying to cross The Mediterranean Sea. Just recently, 26 Nigerian women died trying to cross into Italy; days later, they were given a mass burial by the Italian government.

CNN’s investigative report shows some Africans (from Nigeria, Niger, Mali, and Ghana) being auctioned for up to $400. The CNN correspondents also spoke with some men who claimed they were sold into slavery and abused while trying to gain passage through the Libyan seaport. As shocking as the video is, slave trade in Arab countries is not a new phenomenon. It has been going on in the Arab world for centuries, even after slavery was abolished in the West and fundamental human rights were codified and accepted globally. In all of this, one topic that has rung loudly is how Obama’s administration destroyed Libya by aiding the extrusion of Col. Muammar Gaddafi and leaving the country to the dogs that arose in his place.

A prominent line of argument is that this (the selling of Africans as slaves in Libya) would not have happened if Gaddafi was still in power, that “Obama bombed Libya” into ruins and destabilised the country. This argument has also sought to paint Gaddafi in a positive light, stating that Libya was prosperous under him and that the West was afraid of Gaddafi’s drive to make Africa fully independent of their political and economic influence.

While it is true that Libya prospered under Gaddafi, it is also true that he was a tyrant and a human rights abuser. A classic benevolent dictator. It is also true, based on historical evidence, that slave trading went on even during his regime.

But there was a flip side to the coin.

In The Gaddafi Files, published by Human Rights Watch, it is reported that evidence was found of the strong-hand tactics Gaddafi employed to stay in power. According to HRW, “Back in Benghazi, we were given a set of ancient Betamax videotapes that were recorded back in the mid-1980s, showing an infamous public trial and hangings at a sports stadium that signaled the beginning of an intensely repressive period of [Gaddafi’s] rule. Other images show hangings in the Benghazi harbor, beaten prisoners, smuggled weapons, and the mug shots of detained Islamists. Those too are an integral, if more brutal, part of understanding the nature of Qaddafi’s regime.”

Throughout the 1970s, there were hundreds of arrests and televised hangings in Libya, anyone who opposed the government was immediately endangered. There was no freedom of speech and there was very little regard for human rights, if any. Student demonstrations were shut down almost immediately and journalists were at risk. According to Reuters, “In 1976 Gaddafi authorized the execution of 22 officers who had participated in an attempted coup the previous year.”

These are just some of the many sins of Muammar Gaddafi. He built his country up, but he was no saint either. Not in any sense of the word.

It is possible to appreciate the achievements of a person while also pointing out the indecency of their character and actions. Muammar Gaddafi, as any other human being, had his good and bad qualities. But what we must not do is make him out to be a saint in his death. We must never do that because it convicts us of dishonesty and a disregard for history.