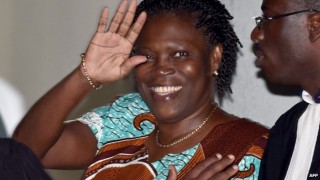 The trial of Simone Gbagbo: Is justice in sight for Ivory Coast?

Simone Gbagbo, wife of Laurent Gbagbo, the former President of Ivory Coast was charged in 2012 by the International Criminal Court (ICC) with crimes against humanity including murder and rape. But while an arrest warrant was issued in the same year by the ICC, she was not transferred by the Ivory Coast authorities. The government reportedly stated that the country’s justice system was capable of handling her trial.

However, in January 2016, her husband, Laurent Gbagbo, became the first former president to be tried by the court since its inception. His refusal to cede power to his opponent, Alassane Ouattara in 2011, resulted in political unrest which led to the death of about 3,000 people. Gbagbo was allegedly able to retain power by employing the state security forces and militants to target his opponent’s supporters. While Laurent’s case is still pending at the Hague, Simone reportedly says she “prefers to be judged by an Ivorian court, because she is accused of committing crimes towards her own citizens, so she must explain herself in front of them.”

The ‘Iron Lady’ (as she’s popularly known), who was sentenced to a 20-year imprisonment for disturbing public order and organizing armed gangs may be imprisoned for life, if found guilty.

Can the Ivory Coast Justice system be trusted to give a fair trial?

Mrs. Gbagbo’s defense attorney has made reference to the influence of the government saying that the chances of Simone’s conviction is high even without any evidence.

Therefore, the government should take the advice of Amnesty International where they state that – “If the domestic trial continues, Côte d’Ivoire must ensure its proceedings comply with international human rights law standards, including the right to a fair trial. Côte d’Ivoire must show the world it is serious about delivering post-conflict justice to victims of all crimes.”