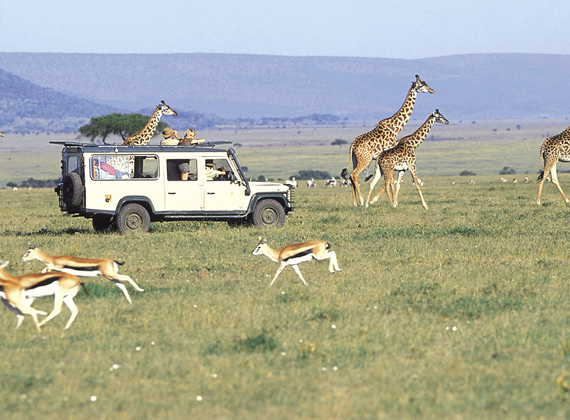 This year, it is expected that 50 million people will spend their vacation in Africa. With the continent continuing to see an increase in tourism, even less fashionable countries such as Zimbabwe are benefitting  from the phenomenon. As the African middle class grows, moreover, more Africans are taking the opportunity to travel around their own continent, with countries such as South Africa benefitting from an increase in both international and domestic tourists. The sector has been growing at a rate of 7.2 percent in Africa, a figure that could be much higher if concerns over security, health and infrastructure are addressed. Tourism is crucial to many African economies, with one out of every 20 jobs on the continent provided by the industry and countries boosting their income through visitors. A small country like Rwanda has managed to turn its 200 mountain gorillas into a $200 million a year industry. Tom Jackson takes a look at the ten fascinating destinations to visit in Africa.

Kenya’s premier wildlife park was established in 1961 to protect wildlife from hunters, and is now the reason why many visitors come to Kenya, attracting millions of visitors annually. Located in south-western Kenya on the border of Tanzania, the reserve is situated in the Rift Valley with Tanzania’s Serengeti Plains running along its southern end. Most of the Masai Mara is made up of hilly grassland which is fed by plentiful rain, especially during the wet months between November and June. The Mara offers the best opportunity to view wildlife in their natural habitat. The Big 5 – lion, leopard, elephant, rhino and buffalo – are all there, along with giraffe, zebras, gazelles, antelopes and hippos. The best time to visit the Mara is during July to October when the astonishing spectacle of wildebeest migration is at its peak. The areas bordering the Mara River are forested and are home to over several hundred bird species. The Masai Mara is easily accessible from Nairobi by car, while there are also airstrips in the Mara.

One of the greatest natural wonders of the world, the Victoria Falls lie between the Mosi-oa-Tunya National Park in Zambia and Victoria Falls National Park in Zimbabwe. They are just over one mile wide (1.7km) and 355 feet (108m) high. During the wet season over 500 million litres (19 million cubic feet) of water plummets over the edge into the Zambezi River. The best time to view the Victoria Falls is during the rainy season from March to May. Mosi-oa-Tunya, the smoke that thunders, describes in a nutshell these mighty waterfalls.  Currently the Zambian side is the more favoured approach due to prevailing political conditions in Zimbabwe, while entry tickets are cheaper in Zambia and the historic town of Livingstone is an added sight.

The Pyramids and the Sphinx, Egypt’s top tourist attraction, is the last surviving member of the Seven Wonders of the World, the Great Pyramid of Giza. There are in fact three main pyramids in Giza: the Great Pyramid of Khufu (or Cheops), The Pyramid of Kafhre and the smaller Pyramid of Menkaura. The Pyramid of Cheops took 20,000 labourers and two million blocks of stone weighing 2.5 tons each to build. Climbing up the walls of the pyramids is strictly prohibited. If you are not claustrophobic, take a tour into the pyramids and attend the sound and light show at dusk near the Sphinx. Each Pyramid is a tomb to a different King of Egypt. In front of the pyramids lies the Sphinx, or Abu al-Hol in Arabic, “Father of Terror”. Carved out of a single block of stone, this enormous cat-like sculpture has mesmerized millions of visitors. Giza’s three pyramids and the Sphinx were thought to have been constructed in the fourth dynasty of Egypt’s Old Kingdom. The town of Giza is just a taxi-drive away from Cairo.

One of the world’s most beautiful cities, Cape Town is overshadowed by the huge Table Mountain, 1086m high and 3km long. A ride by cable car to the top is exhilarating. Table Mountain has numerous bird and animal species along with an abundant bloom of flowers. The city offers many other attractions, such as trips to the wine heartlands in the Western Cape, a trip to Robben Island (where Nelson Mandela was imprisoned for 27 years) or even the likes of cage-diving to watch the great white sharks. The Victoria and Albert waterfront area is a must, while there are numerous beaches around the city and the Cape of Good Hope is a short journey away.

The extinct volcanic region of Virunga offers a unique chance to see some of the remaining 650 mountain gorillas in the wild. The region has about 300 gorillas, and all the rest are in Uganda’s Bwindi National Park. The gorillas can be seen from any of the three countries. Prior permits are needed and sometimes can take a long time unless arranged by your tour operator. The cost of the permit is $500 and proceeds go towards conservation efforts.

There is no more adventurous pursuit in Africa than hiking up Mount Kilimanjaro in Tanzania, the tallest mountain in Africa. Standing at a majestic 5995m, the mountain offers the chance for even the most inexperienced climber to reach the summit. It is the world’s tallest walkable peak and the five zones of climatic changes that one encounters during the walk is breathtaking.  The whole climb takes about 5 days and can cost anywhere between $2000 and $5000.

Imperial Marrakech is located at the foot of the Atlas Mountains. Loud, noisy and smelly, Marrakech is also enchanting and full of history. It is the cultural centre of Morocco. The most popular sights include the Majorelle Gardens or the gardens around the Saadian Tombs. A visit to the famous souks is a must, while there are numerous daytrips that can be taken from town.

An island with a fascinating history and incredible beaches, Zanzibar’s location in the Indian Ocean has made it a natural trading centre for centuries. Famous for its spices, Zanzibar also became an important slave trading post under its Arab rulers. Stone Town one of the island’s biggest attractions. It is a UNESCO World Heritage site, Stone Town boasts beautiful traditional houses, narrow alleyways, a Sultan’s palace and many mosques.

For those interested in African culture, the Omo River Region in south-western Ethiopia is a fascinating place to visit. More than 50 unique tribes live in the region, and its remote location means that traditional customs and beliefs have remained largely intact in spite of the contact with tourists. The Kalashnikovs slung across some warriors’ backs can be a little disconcerting but the tribes are friendly and this is often the only western accessory you’ll see them wear.

Djenne is one of sub-Saharan Africa’s oldest cities, founded in 800 AD. There are famous mosques made from mud, with one designated as a UNESCO site. Located on an island in the Niger River delta, Djenne was a natural hub for traders who shuttled their goods between the Sahara desert and the forests of Guinea. Through the years Djenne also became a centre of Islamic learning and its market square is still dominated by the beautiful Grand Mosque. Djenne is located a few hundred miles downstream from Timbuktu.