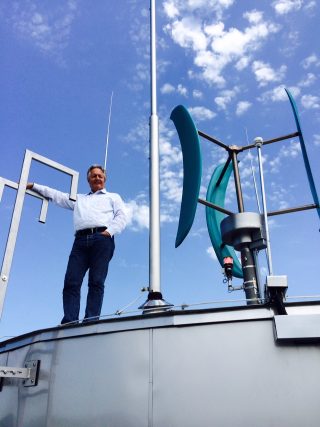 Luxembourger Joseph Hess has developed an innovative concept that combines wind energy, solar power and cloud technology to integrate energy production into a local grid network. The engineer is currently negotiating with several African countries interested in buying the technology.

Improving energy access is a global challenge, and all the more so when it comes to minimising environmental damage in the process. The environmental impact of base transceiver stations (GSM, or telecommunications towers) that run on diesel generators is significant since they produce the equivalent of 30 tonnes of CO2 per year. In Africa alone, there are around one million off-grid GSM towers.

After spending years working in the industrial sector, Hess decided to switch to a more sustainable career path in 2010. He tested two initial models of his smart wind turbine in a wind tunnel and finally came up with an advanced prototype, which was installed in 2014 on the Aquatower building in Berdof, Luxembourg. The prototype subsequently needed an update, particularly the turbine’s electrical equipment, in order to connect to the same cloud network as the company’s newer projects.

After nearly two years of successful activity, it was taken down and each component analysed to learn the lessons of its activities. The results will help Swirl (Smart Wind Integrated Renewables Lëtzëbuerg), Hess’s company, launch serial production of these tiny turbines.

Swirl’s hybrid wind turbine combines wind and solar energy and adapts to its environment, making it autonomous. It’s also the first in the world to be equipped with artificial intelligence features. “We’ve developed an algorithm to optimise the wind turbine’s performance. The turbine will adapt to changes in the wind, collect data on temperature, humidity, etc. It will become an expert in its own activities,” Hess explained.

Swirl has relatively little competition in this segment of the market. A French company that belongs to the engineering and consultancy group EGIS sells wind turbines that can be integrated into GSM towers, but they are a little more complex and therefore more expensive. There’s also a Chinese company, Urban Green Energy, that manufactures and exports small wind turbine systems.

Hess’s design has four-metre blades and weighs just 20 kg. “It takes eight hours to produce. We’ve partnered with Canadian Solar for the photovoltaic part, and the lithium battery is from China,” said Swirl’s founder. “We want to decarbonise intelligently.”

In Western countries, renewables are developing along the same lines in both urban and rural areas. Individuals can even sell electricity produced by their own wind turbine or solar panels. In emerging countries, it’s difficult for conventional networks to supply electricity to an entire population due to the low density of rural populations, the huge distances that are sometimes involved, and the resulting lack of profitability of supplying to these areas. Swirl aims to install its small-scale smart wind turbines in these isolated zones where large-scale energy infrastructure is redundant. “We can produce 50 kilowatts [with each wind turbine], which is enough to supply the needs of a small village. There’s a phenomenal potential in Africa,” Hess said.

There is particularly strong potential for involvement in Africa’s mobile network, which could be transmitted by this next generation of base transceiver stations, especially given that 5G consumes considerably less power than its predecessors. In terms of Swirl’s business model, Africa makes sense. “Selling small-scale wind turbines in Europe on a one-by-one basis is just not profitable. Because of regulations, and also from the point of view of height, the distance between houses, noise, tariffs…” the entrepreneur explained. “It’s the same in many parts of the world, except perhaps in certain regions of the USA or Canada.”

Hess estimates that within the Economic Community of West African States (ECOWAS) alone, there’s potential to deploy 128,000 mini-grids based around his small-scale wind turbines by 2030. Swirl aims to create jobs within African communities by ensuring that the wind turbines are installed by local businesses and locally trained employees.

In 2017, Swirl gained a world-first certification for its wind turbine adapted to machine learning techniques. The company’s business model is currently based as much on licensing sales as on supplying electricity and services to businesses, institutions and governments around the world.

While Hess’s company has formed promising business relationships in Europe and in several African countries, concrete results have yet to emerge. Swirl’s target for 2018 was to sell 50 wind turbines and up to 200 units per year by 2020. However, Hess remains confident: “We’re getting closer to meeting our objectives, thanks to letters of intent received at the end of August which would lead to significant purchases.”
http://swirl.energy/