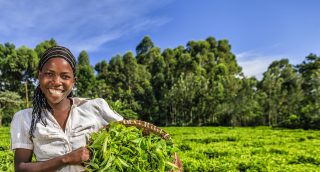 The Russian-Ukraine war is a sign for Africa to attain food autonomy.

It is time for Africa to improve food security- given the happenings in the global economy. Africa is battling inflation pressures forecasted by the International Monetary Fund (IMF) to reach 8.7 per cent by December. According to the IMF, the Russia-Ukraine war has triggered global inflation. It induced commodity price increases and broadened price pressures around the world.

Global growth may slow down this year. The economic costs of the war may “spread farther afield through commodity markets, trade, and—to a lesser extent—financial interlinkages,” said IMF. So, more people would experience food crises in developing countries.

The impact of inflation and climate change on food security

Rising inflation is not the only factor affecting the food supply in most African countries. Unusual climate changes are causing some damage. Extreme climate conditions -induced by the Indian Ocean Dipole (IOD)- have destroyed crops and killed livestock in countries like Kenya, Ethiopia and Somalia. According to Money Web, the IOD has triggered the driest climate conditions in East Africa. It is causing severe droughts and hardship that may linger till December.

The IOD is an irregular variation of sea surface temperatures whereby the western Indian Ocean alternates between being warmer to being colder than the eastern part of the ocean. Over the years, it has resulted in unusual climate conditions globally. Particularly in East Africa, the Horn of Africa, South East Asia and Australia.

In 2019, the dipole resulted in floods in eastern Africa and bushfires in Australia. Also, in January 2020, it triggered a locust outbreak that ravaged East Africa for months. The climate phenomenon is the worse in over 40 years. Recently, South Africa experienced extreme rainfall that triggered floods and landslides. Hundreds of people died as a result, while many lost their homes. President Cyril Ramaphosa called the floods a “catastrophe of enormous proportions” and the biggest tragedy the country has ever recorded.

Currently, these challenges seem beyond human control. The war in Ukraine is still ongoing. Global inflation is not receding, and our climate is deteriorating. Thus African governments need to find solutions to food scarcity. It could start by prioritising food production for Africa and food export to member states. Also, it needs to determine how to be self-reliant; reduce dependence on food imports from the West.

Africa has to eat more what it produces or produce more what it likes to eat. Wheat can be replaced by cassava, where cassava is already the desired staple food. The war in Ukraine is yet another reminder of the need for food autonomy. pic.twitter.com/E1BPI1ZWQ4

Some possible solutions to food insecurity

Solutions to food insecurity in Africa are available and accessible. But member nations need to drop biases and embrace best practices. The same energy channelled into electioneering campaigns should go into agric innovation and sustainable youth empowerment.

Rapid climate change should move governments to adopt innovative farming. Hydroponics, aeroponics and aquaponics are a few examples. Africa’s large youth population may find these agric forms attractive. The onus would then rest on policymakers to provide infrastructure, education and financial support. That could reduce hunger, unemployment and vices in the long run.

Two years ago, Egypt decided to develop innovative irrigation practices. The goal was to improve agricultural services and reduce water wastage. Two ministries signed a Memorandum of Understanding in that regard.

In conclusion, the war has highlighted Africa’s food insecurity. Thus, governments should build alliances with the relevant institutions to guarantee food autonomy.