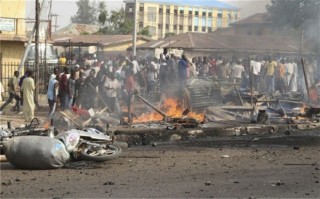 The return of life to Maiduguri distorted by Boko Haram bombings

In the last three weeks, there have been four bombings in Maiduguri, the birthplace of Islamist militant group Boko Haram, despite recent efforts to restore peace and stability to the terror-ravaged city.

At least 20 people died, yesterday after two female suicide bombers reportedly attacked a fish market in Maiduguri. Although Boko Haram is yet to claim responsibility for the attack, they are the key suspects having already carried out similar attacks in the past. Eyewitnesses say the perpetrators were dressed as beggars on arrival to the market; a disguise to make it through the security personnel. One of them blew herself up at the scene, while another bolted, sparking off her vest nearby with no casualties.

The fact that the bombers were bold enough to make an attack that close to the 7th Division of the Nigerian Army, is an indicator that the hope of returning life to the North eastern city remains far fetched. Despite President Buhari’s directive that the Command and Control Centre of the DHQ be moved to Maiduguri, a lot needs to be done to end the violent campaign of terrorists that began in 2009.

Although the recent decision of the government to reopen the commercial wing of the Maiduguri Airport was a good one, this may be short-lived. It was indeed a difficult choice which took a considerable amount of deliberation and persistent requests, but it is important to note that the Boko Haram group was the exact reason why it had been shut down in the first place.

For the last couple of months , the airport was only open to the ‘VIPs’ making official appointments or business trips to other states. Circumstances which left other travellers no choice but to ply the road using public transportation. Thousands of students in the University of Maiduguri residing outside the state were forced to make longer trips returning to school; in many instances breaking the journey so as to meet the curfew imposed in the state.

The re-opening of the airport and the recent movement of the Nigerian military headquarters were the most exciting news for statesmen in a long time. It confirmed the optimism of many that the state would be whole again, however the recent events may have dashed all hope.