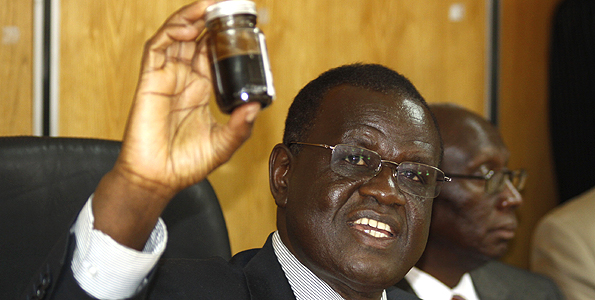 The Oil Conflict Kenya Must Avoid

Kenya’s latest discovery of oil reserves in its penurious north has technically exposed it to armed insurgencies typical of other oil-producing African states.

The East African country announced in March that British-based explorer, Tullow Oil, had unearthed oil in the distant Turkana County bordering South Sudan, Ethiopia and Uganda, in another dimension to East Africa’s latest status as a hot spot for oil and gas exploration. While neighbours South Sudan is an oil producer, commercial oil deposits have recently been found in Uganda, and there are enormous natural gas deposits in Tanzania and Mozambique.

To avoid the type of insurrection that undermined oil production capacities and spawned kidnappings and killings in Nigeria’s Niger Delta region in the past, Mohammed Ekmi, Minister for Northern Kenya and Other Arid Lands says oil revenues must be shared with communities where there the resource is found.

“My nightmare is to have a Kony-type group say: ‘You marginalised us all these years and this is our wealth, and therefore we want to break away’, and basically just start an insurgency that’s endless,” he said. “There are high levels of poverty. There are excessive illegal arms. In Upper Rift Valley alone in around 1997, it was estimated that they had over 200,000 guns.”

In Turkana County, an estimated 60 per cent of the population are pastoralists who subsist on their livestock for survival, and millions of who depend largely on food aids owing to successive hard-hitting droughts.

The sun-sweltered flatlands are known to be home to small arms usually smuggled in from neighbouring countries, especially Somalia. Rustling of cattle, clashes over grazing land and water, and armed raids from Ethiopian and Ugandan assailants are also common features among pastoralists.

“I don’t see how any legislation will pass without saying a certain amount will go to the county for its development, purely for the security side, to avoid problems,” the minister said.

Aligning with Elmi’s position, experts have urged the channelling of oil revenues into such sectors as infrastructure and education, in order to build a sustainable base on which future development can be hinged.

To avoid a re-enactment of the Nigeria situation, the Kenyan government, as it must have been imagining the enormous profits to come from ‘black gold,’ must by now be equally perfecting its strategies for creating employment for the oil-rich but poverty-stricken communities. It must empower the Turkanas such that they can form part of the technical staff that will be hired on the sites. For the Kenyan government to extract oil from the Turkana County and move it straight to Nairobi is an invitation to bloodletting that the nomads will not reject. The continent is replete with such heart-rending history.