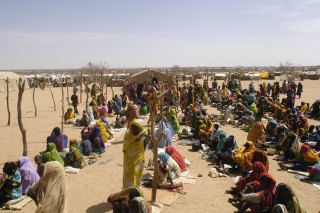 The number of Internally Displaced Persons (IDPs) in Nigeria is growing, quickly.

Over the years, the growing number of Internally Displaced Persons (IDPs) in Nigeria is becoming alarming. IDPs are people who have fled their homes because of conflict and persecution based on religion, race, nationality, membership of a social group or political opinion but remain within their home country’s borders.

According to Internal Displacement Monitoring Center (IDMC), at the end of 2013, 33.3 million people were displaced by conflict and violence. The IDMC said there were 1, 538, 982 IDPs in Nigeria as of April 2015.

Perhaps more alarming than the number of IDPs are the poor conditions under which most of the IDPs are living. A large majority of Nigeria’s over 1.5 million displaced persons are housed in overcrowded camps across the disturbed northern regions. These camps which are mainly school facilities and empty government buildings with few basic amenities are supervised by the National Emergency Management Agency (NEMA).

IDPs are among the most vulnerable set of people who the government needs to cater for while ensuring that they are secure and of sound health. The Nigerian government appears to be having a very difficult time confronting persistent security issues.  Two weeks ago, a bomb blast rocked an IDP camp in Yola, leaving at least two people dead and seven injured. If bombs can still explode in supposedly safe zones set up by the Nigerian government, then IDPs may not be safe anywhere in the country.

Although in April the government said it established ten temporary primary schools at IDP camps in Maiduguri in partnership with  the effort of the Borno State Emergency Management Agency (SEMA), it is apparent that many IDPs remain deprived of this right to learn. Despite the military’s claim to have retaken and reopened a school in Gwoza recently to assist IDPs, nothing concrete seems to have been done to alleviate education challenges of Nigeria’s IDPs. This twitter post by popular social media personality Omojuwa shows as much. 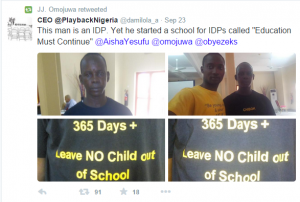 While the government might be overwhelmed, some philanthropic Nigerians and NGOs like Body Enhancement Foundation, and international agencies, have stepped up to help. In New Kuchingoro, a village hosting about 5 million IDPs in Nasarawa, a couple is said to be contributing over N480, 000 monthly to keep 300 hundred children of displaced persons in school. The United States Agency for International Development (USAID) stated its support for the American University of Nigeria, Yola with a grant of $801, 000 for boosting education for IDPs.

Interestingly, in a bid to make the poor conditions less abhorrent for the displaced persons, Nasrul-Lahi-li-Faith Society (NASFAT)  donated food and drinks during the Sallah celebration to the displaced persons in Ikorodu, Lagos. Governor of Borno state, Kashim Shettima, also celebrated the Eid-el-Kabir season with IDPs, distributing gifts of assorted fruits to displaced children.

Meanwhile, Guiness Nigeria and ActionAid just signed a new deal to support the intervention for IDPs. Coupled with this, President Buhari had reiterated his administration commitment to the plight of IDPs.