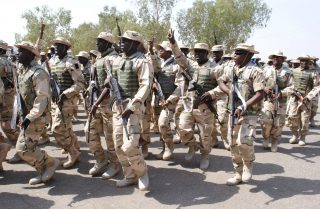 The Niger Delta Avengers are back; time to talk about how Nigeria itself perpetuates terrorism

Nigeria’s Niger Delta militants have warned the Federal Government that they will resume attacks on the nation’s oil facilities after more than one year without. “This round of attacks will be the most deadly and will be targeting the deep sea operations of the multinationals,” the Niger Delta Avengers said on their website on Wednesday.

A series of attacks from the Niger Delta avengers on Nigerian oil pipelines and refineries in 2016 made the country incur losses as its heavily oil-dependent economy nosedived. The Federal Government negotiated a ceasefire with the group in August 2016, but that wasn’t enough as these attacks, coupled with the low oil prices, pushed Nigeria into a recession, the first of its kind in about three decades. The Niger Delta Avengers have promised to attack Shell Oil and Chevron Oil installations in the Niger Delta in their recent statement. However, these new threats are part of a larger problem in the Nigerian nation-state.

This news comes at a bad time for President Muhammadu Buhari, the leader of the country at a time when its sovereignty is seemingly facing threats from all sides. The Boko Haram militants in the North-East have been demanding for their own state since 2010, the Fulani Herdsmen crises in the middle belt region basically exists because of grazing pastures for cattle, and the intermittent attacks from the Niger Delta militants are for a greater share of the oil largess. While the first two have been much more deadly than the Niger Delta Avengers, they all seem to have one mode of operation — hoping to achieve their demands through violence.

It’s a foregone conclusion that terrorism has often been used to achieve political aims, and, usually at the expense of lives and property. Terrorism, according to USA’s FBI, is “the unlawful use of force or violence committed by a group or individual, who has some connection to a foreign power or whose activities transcend national boundaries, against persons or property to intimidate or coerce a government, the civilian population or any segment thereof, in furtherance of political or social objectives.” Hence, the constant debate on Nigeria’s social media on which organisation should be considered ‘terrorist’ is redundant. Rather, the government’s way of tackling them has been wrong.

While the Federal Government’s way of dealing with terrorism within its borders has involved, in part, negotiation, and in part, a show of force, the constant battle on all fronts would sooner or later take its toll on an already underpaid and unmotivated Nigerian Army, leading to a fragmented nation-state.

The Nigerian Government is guilty of constant use of force and violence.

Here are few examples of that: the Nigerian Army has been accused of human rights abuse, the most prominent being its attack on members of the Shiite sect in Nigeria, killing more than 300 people and burying them in unmarked graves. Another example points to the #EndSARS movement, a movement that protests police brutality all over Nigeria the country is ongoing, with numerous stories online of how the anti-robbery unit of the Nigerian police force has perpetuated violence akin to terrorism on the citizens. The arbitrary arrests, by men of Nigeria’s State Security Service of key members, of the opposition groups are sometimes in violation of Nigeria’s constitution.

The usual ‘the Niger Delta Avengers are dangerous to Nigeria’s democracy and peace’ rhetoric will saturate the airwaves. While we all wait for that, we should remember that a country that uses its state security apparatus to disavow its role in upholding democracy, the rule of law and basic human rights is in itself, terrorist. The solution is to defend democracy, the rule of law and uphold basic human rights, and an inclusive society without agents of terrorism will be born.