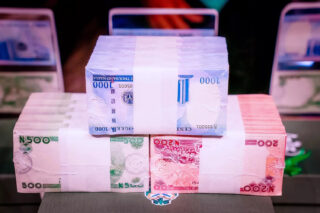 The new naira notes rollout is off to a sloppy start

When you log on to the homepage of the Central Bank of Nigeria (CBN), a timer stares back at you, counting down to January 31st, when the current series of N200, N500, and N1000 notes will become invalid in Nigeria. But as we inch closer to that deadline, there’s growing uncertainty around its realism.

Let’s start from the beginning. In late October, when Nigeria announced that it would redesign these notes, it sparked a frenzy of mixed reactions, most of which were not optimistic. But the central bank cited several reasons for making this move. Primarily, it believed there were unhealthily large volumes of cash stashed outside banks, most of which were illegally acquired. According to Godwin Emefiele, the CBN governor, the apex bank had lost track of N2.7 trillion of the N3.2 trillion notes in circulation. So it planned to suction all that money back by redesigning the naira, forcing the owners to either deposit or forfeit them. Launching redesigned naira notes was supposed to double as an anti-inflation and anti-corruption move.

One would expect the new naira notes rollout to be rapid, given its tight schedule. But 21 days after its launch, new notes are still scarce, even in banks. ATMs still dispense old notes, and many Nigerians don’t yet recognise the new ones. More so, the CBN governor, who should be overseeing the speedy rollout, is reportedly on the run from Nigeria’s Department of State Services (DSS). Yet, the CBN governor is sticking to his guns on the deadline.

It could (and should) have been a lot less chaotic

On the evening of November 8, 2016, Indians watched an hour-long broadcast where Narendra Modi, the Prime Minister, made one of the most shocking announcements. “Which honest citizen would not be pained by reports of crores worth of currency notes stashed under the beds of government officers? Or by reports of cash found in gunny bags?” he asked.

“Brothers and sisters, to break the grip of corruption and black money, we have decided that the five hundred rupee and thousand-rupee currency notes presently in use will no longer be legal tender from midnight tonight, 8th November 2016.”

And just like that, two denominations became illegal overnight, and Indians had less than two months to exchange their old notes for new ones. As you’d expect, this sudden policy had instant consequences.

Just three hours before Modi’s speech, Pintu, a scrap collector in Delhi, had boarded a train for a 24-hour journey to his village near Calcutta, wrote Dana Kornberg, a researcher at the University of Michigan. “With him were 11 1,000 rupee notes that his buyer gave him as an advance just before he left. Just as he got on the train, the notes were declared worthless, and he barely managed to buy a single meal for his family along the way. More importantly, it was very difficult for people like Pintu and even the scrap buyers to get the new 500 and 2,000 rupee bills issued to replace the eliminated notes.”

Just like Nigeria is doing today, India wanted to mop up the excess cash supply in the country. But that’s not what happened. Within a year, cash in circulation was as high as before Modi’s announcement. And even worse, net savings had plunged by 50%. In 2018, Bloomberg reported that the scheme struck “agriculture and small businesses with a liquidity shock, put people through unnecessary hardship, disrupted supply chains, and destroyed demand for everything from autos to property”. Now it’s been six years, and cash usage is at an all-time high.

It’s probably too late to debate whether or not Nigeria needs to redesign its currency. But there’s always time to reflect on better modes of execution. Nigeria’s current pace implies it won’t be ready to phase out old currency notes on schedule. Nigeria ranked 124th out of 137 countries in card penetration in 2021. So cash is still king. Introducing new naira notes to such a highly cash-dependent economy certainly needs better execution.

Did Nigeria have better options?

The short answer is yes. But of course, it’s never that simple. Firstly, Nigeria’s law book does not give any procedure for rebranding or redistributing the naira. It only mentions who gets to do what, like allowing the CBN to print, issue and re-issue naira notes. It’s up to the apex bank to decide how to do the work. And this time, it chose India’s model.

Redesigning and reprinting currency notes is not strange anywhere in the world. However, some countries have more structure than others. For instance, in the United States, security is the top priority when redesigning currencies. It needs to be hard to counterfeit. So, they require about a decade of research and development, followed by years of optimization to deploy security features into the banknotes. And there’s a fixed long-term schedule for issuing these new notes. From 2026 to 2034, the U.S. will roll out redesigned $10 (2026), $50 (2028), $20 (2030), $5 (2032) and $100 (2034) bills. Each bill will come in a separate year, but the entire project has been in the works since 2011.

In December, the Bank of England also announced that it would release redesigned notes. But they’re not hitting the market until 2024.

It may not be fair to expect Nigeria to spend as much time as the U.S. working on a currency redesign, even though it’s a more efficient practice. Unlike the naira, the greenback is the most used currency in the world. So an extensive schedule is not negotiable. Also, the goals are not the same. While the U.S. redesigns its currency for security, Nigeria wants to drive a cashless economy.

Nevertheless, the CBN’s aggressive pattern was clearly not its best option. At the very least, it doesn’t even have a roadmap to circulate new notes. So no one knows what it’s planning, talk less of aligning with it.

According to Rachael Adebayo*, a Relationship Manager at First Bank of Nigeria, even the banks didn’t get a heads up. “We just heard about it on the news. There was no prior notice. We didn’t know anything,” she told Ventures Africa. “It was somewhat embarrassing that we didn’t even know what to tell clients who had questions because we knew just as much as they did.”

More so, new currency launches usually arrive on the back of massive public education. The people who will spend the new naira ought to know about it. But there was no campaign. So it’s no surprise that people still struggle to recognize the new naira notes.

The bottom line is that no plan can help any country, much less Africa’s most populated nation, to achieve a cashless economy overnight. The CBN might have ambitious plans to cut down cash usage. But it needs to focus on creating access first.