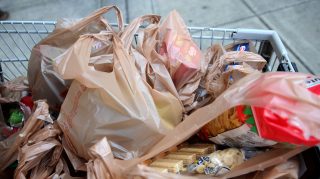 The many sides to Nigeria’s ban on plastic bags

Over the years, Nigeria has made efforts to end pollution from polythene bags with little success. However, it now appears that the government may have achieved that objective as Nigeria’s Federal House of Representatives recently passed a bill to ban the distribution and use of plastic bags.

On Tuesday, Nigerian lawmakers approved the bill with the intention of tackling several environmental worries the country is facing. The bill contains “an act to prohibit the use, manufacture and importation of all plastic bags used for commercial and household packaging in order to address harmful impacts to oceans, rivers, lakes, forests, environment as well as human beings and also to relieve pressure on landfills and waste management and for other related matters.”

It also lays emphasis on the need for retailers to provide paper bags as alternatives for customers at the point of sale. Failure to abide by this rule will attract a cash penalty not exceeding N500,000 or a three years maximum jail term for individuals and N5 million for organizations and corporate bodies found wanting.

This new policy not only looks attractive but also proffers a few solutions to a lot of environmental issues that have surfaced in Africa generally.

The use of plastic bags might be popular among shop owners and consumers across countries but the item is said to be causing more harm than good. Countries like Kenya, Tanzania, and Rwanda have prohibited the use of this item within their territories

A report by Greener Ideal shows some of the adverse effects of plastic bags on the soil. They get into the soil and slowly release toxic chemicals. They (plastic bags) also pose a threat for both domestic and terrestrial animals who sometimes choke on them, suffer health problems and in most cases die.

This problem also causes a clogged sewage system, stopping water from flowing properly and in turn, a lot of damage to properties.

Contrary to the many problems this ban will solve, a more critical look leaves one wondering about the prospects of industries that produce plastic bags in Nigeria. The country is home to more than 30 plastic bag production companies, which serve over 10,000 people with jobs in the country.

A ban on this commodity will leave a lot of people who survive on the plastic bag manufacturing and recycling industry jobless. A survey by the National Center for Policy Analysis (NCPA) also recorded this loss when plastic bags were banned in the United States.

Notwithstanding, a spillover effect is the promotion of local production of woven baskets, knitted bags and other alternatives that will be economic friendly.