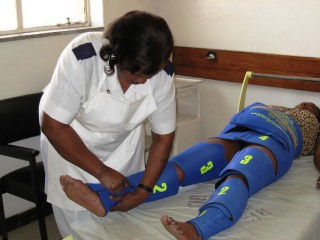 The LifeWrap: An innovation that is reversing maternal mortality in Nigeria and other developing countries

However, there is a new ray of hope for Nigeria, as well as other developing countries, with the introduction of the LifeWrap, a wet-suit-like garment that is made of neoprene and Velcro, cut into various segments. An article on TakePartWorld tells the story of Aisha, a young woman in Kano who suffered postpartum haemorrhage and went into shock after she gave birth in her home near Kano State. The mother of nine would have died but for the LifeWrap used on her at the hospital she was rushed to.

“Aisha’s blood pressure immediately increased and gave her the four hours necessary for blood to arrive and the cause of her excessive bleeding to be treated.”

“This is a typical scenario for many new moms in developing countries who suffer from postpartum hemorrhage, the leading cause of maternal mortality. Now the LifeWrap is making great strides in reversing the mortality rate in these countries.”

Developed by Suellen Miller, a nurse-midwife and professor in the obstetrics and gynaecology department at the University of California, San Francisco, the LifeWrap is a non-pneumatic anti-shock garment that acts as a first-aid device to stabilize new mothers at risk of death. The technology keeps women alive while they travel to a hospital for surgery or await treatment.

Miller has had a long career in international maternal health, witnessing the dire situation many new mothers in developing countries face and being aware of the deplorable numbers concerning maternal mortality around the world. “Women were dying of haemorrhaging and there was just no change, it was always the same.” She noted that despite the emergence of new medications, women still died after going into severe shock.

After being introduced to a doctor in Pakistan, who used a device called the ‘non-pneumatic antishock garment’, Miller improved on the technology and years later, headed to Nigeria and Egypt with her team of doctors to begin clinical trials with their version of the equipment. The results were incredible; the LifeWrap reduced maternal mortality by 50 percent.

“The LifeWrap interrupts the bleeding process and allows the body time to clot. When women are pregnant, the uterus is filled with blood vessels to supply blood to the baby. After delivery, the uterus contracts to put pressure on the blood vessels to stop the bleeding, just like a cut. But sometimes the uterus doesn’t contract down and bleeding continues, which can lead to organ system shutdown and death. Medication can help contract the muscles, but that’s not always available in developing countries.”

“The big difference is surgery—where in the U.S. you wait maybe 20 minutes or an hour at the most,” says Miller. “And in some of these countries like rural Ethiopia, it’s days between a woman going unconscious and surgery or blood transfusion. This device keeps blood in the heart, lungs, and brain and will make a huge difference.”

With an almost immediate effect on the patient, the LifeWrap is no doubt, an affordable — about $45 — and easy-to-use lifesaving first aid for mothers in developing countries. Upon application of the LifeWrap, an unconscious dying woman can regain consciousness within 15 minutes. All it requires is two trained people and a patient can be wrapped up in 10 seconds. The garment is washable and reusable and can be used over 140 times. LifeWrap is also useful in any type of pelvic bleeding, including ruptured ectopic pregnancy or failed abortions.

The LifeWrap has been approved by the World Health Organization, International Organization of Obstetrics and Gynaecologists, and the United Nations Commission on Life-Saving Commodities. It has also been recommended to be made available by governments in health care centres as a management protocol for postpartum haemorrhage.

Watch video below to see how the LifeWrap saved Aisha: