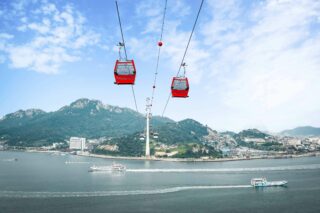 A signpost caught my eye once while I was in traffic, the infamous traffic before Muri Okunola Park in Victoria Island, Lagos. It read, “The Lagos State government has approved this parcel of land for the development of the Lagos cable car transit project.” The paint on the signpost had faded, indicating that the project’s plan was not recent. If the plan had materialized, I probably would not be in traffic at that moment.

Lagos is Nigeria’s commercial hub and home to an estimated 24 million inhabitants, making it the highest populated state in the country and the second most populous in Africa. Because of the economic opportunities that abound therein, the state receives a massive influx of people from time to time. While this is good for economic productivity, it has its downsides. Lagos is geographically the smallest state in Nigeria, partly because water occupies a vast portion of its territory. The massive population has no choice but to compete for available space in the state. People are also dealing with infrastructure issues, particularly in the transportation sector. The challenge is quite critical that it is always prioritised by administrations old and new, but there is little to show for it.

The first leg of the T.H.E.M.E.S development agenda by the present governor, Mr. Babajide Sanwo-Olu, is designed to address traffic management and transportation. Bus Rapid Transit, LagFerry, and recently LagRide, are some of the transportation means introduced by the state government to tackle traffic. But transportation issues persist, and the reason isn’t far-fetched. Most existing means of mass transportation in Lagos are road-dependent and cannot meet the needs for rapid and safe transportation desired by many residents. Everybody in the state bears the brunt regardless of their economic status.

A report by Danne Institute for Research indicates the cost of traffic congestion to individuals is N133,978.68 per annum for privately owned vehicles and N79,039.40 each year for those who use public transport. In all, Lagos may be losing as much as N4 trillion annually and 14.2m hours daily to traffic congestion. With over 5 million registered vehicles on its roads, Lagos has an average of 200 vehicles per kilometre, exceeding the national average of 11 vehicles.

Lagos’s population will surge to about 45 million by 2050. The mega the city, the mega the challenges. So there is a dire need to create a more efficient and sustainable means of transportation systems. The cable car is one such system. In 2013, the Lagos state government approved a 30-year agreement with Ropeways Transport Limited to introduce a cable car mass urban transit to ease traffic and tension on the roads of the city. The cable car is a suspended cabin that moves between terminals via electrically-propelled steel cables. Although it is often associated with mountainous or hilly regions, they are gradually taking root in big cities globally to improve sustainable urban transportation.

The Lagos cable car project (12.85 km) was billed to connect Lagos Island with the mainland and Victoria Island. The $275 million cable car project was to be financed, in part, by the African Development Bank and completed in 2015. Although the project is part of the Lagos state’s transport system master plan, to this day, all that is seen are just pointers (signboard) of an age-long intended project. And although the cable car as a mode of mass transit is not being used yet in Nigeria’s commercial hub, it is not alien to Nigeria.

Nigeria is home to Africa’s longest cable car system at Obudu Mountain Resort, where tourists get an ariel view of the green hills of the Obudu Plateau in Cross River State. Driving to the resort through the 11km zigzag route takes about 25 minutes, while the cable car ride takes about 6 minutes. This is one of the reasons why its adoption as a transport system in Lagos state is crucial. It is a faster mode of transportation. People do not have to sit for several hours in the vehicle to get to their destination. The proposed cable car is said to have an estimated capacity of 240,000 trips daily, reducing average journey times by as much as 70 minutes. This is a benefit neither road nor water transport offers. The speed and comfort it provides would make car owners abandon their vehicles. And fewer cars on the road equals less congestion.

The cable car also provides a high degree of safety compared to other means of transportation. Between January and August 2021, the Federal Road Safety Corps (FRSC) reported 101 fatalities and 625 injuries due to road crashes in Lagos. This is avoidable with a cable train since cable cars are not vulnerable to bad roads, brake failures, and road congestion. The cable car system is rated one of the safest means of transportation worldwide, and passengers are 20,000 times more likely to be involved in a fatal accident in a vehicle than in a cable car.

Aside from that, the transportation system is an environmentally friendly mode of transportation. Since there is no onboard motor, the cable car is silent and emits no direct air pollution. The world is racing to reduce greenhouse gas emissions, and conscious efforts are being made to adopt sustainable modes of transportation. Nigeria is also on the right track; people are gradually embracing electric vehicles in the country. However, most of the vehicles plying Nigerian roads are foreign used, and only a few per cent of the population can afford new or electric vehicles. A cable car project would enable people to access a sustainable yet cheaper means of transport. Fewer cars on the road equal reduced emissions.

Infrastructural projects often create employment opportunities directly or indirectly. Projects of this kind require expertise during construction. This would mean employment for many professionals and indirect jobs for roles and services connected to project development. Also, permanent jobs become available for people needed for the day-to-day running of the cable car e.g ticket officers and transport guides. As reported in 2013, the Lagos cable car project could provide 3,400 construction jobs and 450 permanent jobs for operations. Times have changed, and the possibility of having more hands on the project today cannot be discounted. For example, technology is disrupting the globe, and software or hardware engineers could be engaged in the project to make things more seamless. Generally, this would play its part in reducing the soaring rate of unemployment in the state.

The cable car is not without its shortcomings, but they are minimal. When a cable line malfunctions, the entire line can be affected because the cable line is a fixed link transport system. This can hinder a trip until it is fixed. This mode of transportation is also at a disadvantage for acrophobic passengers. The cable car is built at such a height that it can pass over obstructions like hills and mountains. So passengers afraid of heights are not likely to use it. But since its benefits overshadow its disadvantages, the cable car is a worthy alternative for the Lagos state government to consider in easing the transportation burden of its inhabitants.