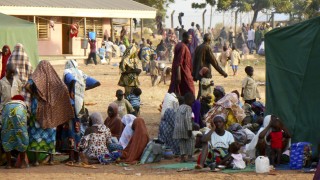 The IDPs are not safe, even in heavily guarded settlement camps

In Nigeria, the internally displaced persons’ (IDP) camps housing people displaced from the insurgency by Boko Haram (the Islam caliphate terrorist group) in North-Eastern Nigeria, has come under scrutiny for their poor conditions under which the IDPs live. These conditions range from hunger to insecurity, and recently rape and sexual exploitation.

The insurgency has left over 10,000 dead, 2,000 abducted, and 2.5 million people displaced. These displaced people are left at the mercy of landmines, badly managed/funded IDP camps, hunger, and all forms of sexual predation. If IDP camps are not safe for them (the IDPs), where can they be safe?

IDP camps are supposed to be a safe haven for people who have escaped from or have been expatriated by insecurity. It isn’t a home away from home, but it is at least a little touch of the reality they have lost in the rubbles and the desolation left by the war. The IDPs camps in Borno state, fall short of this description. Internally displaced people have relived the war in a subtle manner, with the hunger, sexual molestation, rape, that have rigged the camps.

On Thursday last week, it was reported that some IDPs were fatally injured by landmine explosions at Ngom village, 20km away from Maiduguri, as they were conveyed from the camps to Gamboru-Ngala. These roads were already cleared by the Nigerian Army one hour before the incident. This was followed by the cry of Nigerian Emergency Management Agency (NEMA) to the IDP camps around Borno to be vigilant regarding terrorist attacks that have been intercepted.

Although the interception of attacks has been coordinated by security agents, this hasn’t stopped some of the agents from carrying out their own attacks in the camps against young girls and women through rape and sexual exploitation, according to Human Rights Watch.

Young girls and women who have been subjected to painful memories of the war, have also been left to carry the burden of being raped, sexually exploited, and occasionally sex trading for food (to live another day) due to its unavailability in camps.

“One day he demanded to have sex with me I refused but he forced me. It happened just that one time, but soon I realized I was pregnant. When I informed him about my condition, he threatened to shoot and kill me if I told anyone else. So I was too afraid to report him.” This was an account of a 17-year-old girl who was approached with an aura of friendship by a policeman who raped her afterward.

According to a medical health worker in one of the camps, the number of people requiring treatment for sexually transmitted diseases, including AIDS, has more than doubled from 200 to 500 between 2014 and July 2016 in a camp of 10,000 people. In addition to this, residents of IDP camps in Maiduguri have become like prisoners due to the restrictions on their movement in and out of camps. This is contrary to principle 14.2 of the United Nations Guiding Principles on Internal Displacement, which provides that internally displaced people have “the right to move freely in and out of camps and other settlements.” Also between May 23 and June 22 this year, at least 188 people died mainly from diarrhoea and malnutrition in an IDP camp in Bama, Borno State.

Unequivocally, it can be said that the situation of the IDPs has transcended into chaos and dire need of intervention. The realisation that these people who have survived a war are forced to survive another kind of human emergency in these camps that are supposed to be a safe haven for them is heartbreaking.