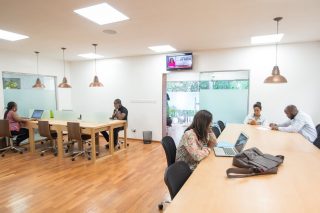 The hybrid workplace and how union systems is staying competitive

While there’s no novelty to the hybrid mode of working, top-level executives, managers, and team leads continue to grapple with the ambiguity that comes with it. Is it as effective as it has been propagated to be? Whose interest does it serve more, the organization or the employee?

In this article, Ronke Okafor, Head of Human Resources at Union Systems, shares her thoughts on how the hybrid model is serving the leading financial software company in Africa and what they are doing differently from its competition.

Setting the tone from the beginning, Ronke states that “The hybrid work structure is a welcomed development thanks to COVID-19, but if not managed well, it can become a disaster.” Besides the pandemic, another factor that influenced the company’s decision to embrace this new normal was its environment. With its headquarters in Lagos, Nigeria, adopting the hybrid situation was a no-brainer because the odds were stacked against long commutes, traffic congestion, and rising transportation costs to mention a few. Although this model has been adopted by many organizations across industries, the first and largest users are in the technology industry.

A report titled “Shaping the Future of Work in India’s Tech Industry”, which includes a stakeholder survey of 75 public companies discovered that over 80 percent of IT companies are likely to adopt a hybrid work model as compared to the rest of the industry segments. Given the choice, about  70%  of employees in the digital sectors would prefer a combination of remote and on-site work models, while 25%  would opt for completely remote work. The latest statement was corroborated by Ronke, who confirmed that despite the 2-3 days’ Work from Home (WFH) opportunity provided to employees, several employees are beginning to demand fully remote options. Although that is a completely different conversation, the company’s flexibility, and autonomy for its employees stand out.

As an organization that prioritizes its people, USL quickly recognized that this model enabled its employees to put their best foot forward by catering to their individual preferences. For instance, an employee who works more efficiently in the evenings than in the mornings can adjust his/her work schedule as much as possible while still delivering the expected results on time.  Personal preferences and lifestyle balances are amongst the upsides of the hybrid model and this indigenous tech company is leveraging on it.

Although the hybrid/WFH model has its pros and cons, productivity and collaborations remain top priorities. Various reports and surveys have provided evidence of the impact these work models have on productivity and collaboration; however, Union Systems believes that it is not a white or black situation. Emmanuel Nkenwokeneme, the company’s Chief Technology Officer, believes that an uptick in productivity is a direct result of the individual performing the task. In his own words. “Some employees are self-motivated and do not need an additional boost while others require constant supervision to deliver what is expected of them. Hybrid or not.” He believes that in order to see a tangible benefit, organizations should identify the self-starters amongst their employees and allow them to enjoy the flexibility and autonomy of this new world of work. Segun Aribisala, Product Head provided a different perspective. He does not believe the hybrid model has necessarily increased productivity, rather, he believes it has served as an additional incentive to motivate and retain employees.

So, what then does this model bring to the table, particularly for organizations that have adopted it?

According to the Head of Human Resources, “a reduced rate of attrition”. She reiterated that the hybrid model has not significantly impacted productivity levels and the organization’s current system still allows for virtual and in-person collaboration.

It is almost impossible to talk about the world of work today without touching the subject of demography. A salient feature of today’s workplace, especially in the tech industry is the category of employees.  According to Computer World, by 2025, Gen Z will make up about 27% of the global workforce, and  Millennials already make up about 37% of the workforce today, according to the World Economic Forum (WEF), though other data puts that figure even higher.

Nonetheless, tech companies such as USL have large numbers of Gen Z employees in their workforce and this category of employees is notorious for their work style. As highlighted in a Deloitte report, they are redefining work patterns with incessant and unending demands ranging from hybrid opportunities to remote and now a four-day work week.

What this translates to is a more competitive workplace and the need for organizations to put their best foot forward when it comes to attracting and retaining top talent. Although their demands are unlikely to abate anytime soon, Union Systems’ strategy of hiring an equal number of millennials and Gen Z contributes a sense of balance. In their words, “the mix helps the Gen Zs learn the essentials of the workplace, which in turn helps the business manage the microwave mindset that is fast becoming the norm.

But is this sufficient? How many employees can organizations retain on a hybrid basis alone?

Even though the autonomy of these new work models has kept attrition to a minimum, USL has taken additional steps to differentiate itself and secure the bag of assets flocking its way, and one of the key ways they have done so is to increase the extrinsic benefits for their employees.

In addition to ensuring that financial compensation meets and exceeds industry standards, the organization has added benefits such as spousal allowance paid directly to employees’ spouses, singles allowance for unmarried employees, training subsidy fees, Annual tuition subsidy for employees who have children, and an employee share option scheme. “There will be more benefits as we grow” Ronke affirms “but for now, we are pleased with the additions we have made.”

Without a doubt, the future of work will continue to evolve, and while no one can predict how things will turn out, what is important is that each organization determines what works for them and what does not.

As the Vice President of Operations, Emmanuel Kalu, puts it, “The success of hybrid is highly dependent on culture.” He believes there are no hard and fast rules when it comes to its implementation; rather the success or failure of it is dependent on the levels of discipline exhibited by its beneficiaries.

Nonetheless, Union System remains a nimble organization that is aware of the realities of its environment and remains committed to swimming with rather than against the tide.