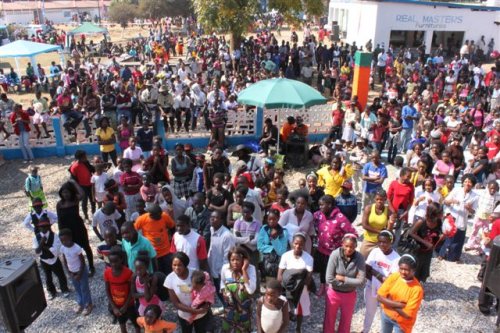 The Future Of Humanity Is African – UNICEF

s Children’s Fund (UNICEF) declares, before stating that more than half the projected 2.2 billion rise in the world population in 2015-2050 is expected to take place in Africa.

As population growth in other parts of the world continue to slow down, Africa’s population will continue to grow exponentially to a quadruple by the end of the century.

Nigeria, the continent’s most populated country, is projected to reach 1 billion by the end of the century, 440 million in 35 years time. And with Africa’s population concentrated in Eastern and Western Africa, which the report says already account for more than 60 percent of the continent’s inhabitants, both sub-regions are projected to have, by mid-century, two thirds of Africa’s population.

For Southern Africa and Central Africa, the report states that their “populations will approximately double, to around 300 million and 100 million respectively. Based on current trends, the four sub-Saharan African regions will continue to see increases in their population totals through the rest of the century; only North Africa will see its population begin to level out towards the latter part of the century.

And most of Africa’s population will, like now, remain young; 1.8 billion births will take place in Africa in the next 35 years, the report estimates, of which the continent will have almost 1 billion children under 18 by 2050, making up nearly 40 percent of kids worldwide.

This is a huge population explosion for a continent that was sparsely populated five decades ago when only 9 among 100 of the world’s number were Africans.

However the upsurge in population growth, side by side the continent’s continuing battle with poverty, high unemployment rates and provision of basic needs for its people, have drawn worries that excessively high population growth will divert resources away from growth and development and toward just keeping up with basic needs, thus closing the promising window on growth that is now opening.

Niger is an example of this; the lowest ranked country in the world according to the United Nation’s Human Development Index (HDI), it has the largest percentage increase in population among African countries, at 260 percent). Its population will rise from 19 million to 69 million from 2015 to 2050. By 2100, 204 million people are projected to live in Niger.

Nevertheless, population growth is also an opportunity for Africa’s developmental growth; high population also means a huge consumer market, and this has begun to attract international investors who are no longer solely interested in extracting mineral resources but also investing in and reaping in Africa’s human resources, as exemplified by the just concluded US-Africa summit.

Investments in Africa, alongside the right creation and implementation of government policies will see the creation of jobs for the continent’s rapidly expanding youths. By 2040, Africa is expected to have the biggest labour force in the world and experiencing faster economic growth than any other region, according to a report issued by PwC.

“With many African countries set to see unprecedented absolute increases in their child and overall populations, national development planning and systems strengthening must be adapted and sharpened to prepare for these demographic shifts. Demographic analysis at national and particularly at the sub-national levels must become a much more integral component of development programming in Africa”.

The United Nations body also charged that it was “imperative that a discourse takes place on Africa’s child demographics, poverty and inequity and rights, and that all the many stakeholders that will help to determine the continent’s future, including governments and donors, the private sector, civil society organizations, religious leaders, and children themselves, be included and have a voice. It is time to acknowledge our shared responsibility to the future of Africa and take the policy decisions required for all Africa’s children, present and future, to finally realize all their rights”.