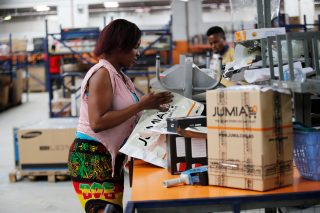 The single office location on Wole Olateju Crescent in Lekki, Lagos, where the company initially commenced operations in June 2012 is a long way from where it is today. In the intervening ten years, Jumia has grown into one of Nigeria’s most recognisable brands and one of the few brands that can describe itself as truly pan-African.

On its way to becoming one of Africa’s most successful brands, Jumia has done much more than sell items over the internet, which is what many erroneously thought e-commerce was about. Conquering Nigeria’s behemoth-sized albeit uniquely challenging market has seen the company morph into different things when needed. A logistics and delivery solution today; an efficient warehousing and order fulfilment operation the next day; a successful marketplace platform integrated with a native payments solution the day after.

For ten busy years, it has been an unbroken story of constant learning, improvement, iteration and ultimately, ground-breaking success and market leadership. From setting out to prove that e-commerce could crack the Nigerian market in a way some said was impossible, Jumia now finds itself chasing an entirely new set of objectives, having delivered on its initial promise.

It is difficult to exaggerate just how little was known about the African e-commerce market before Jumia set up in Lekki ten years ago and started expanding across the continent. Initially, the idea some had about e-commerce in this part of the world barely went further than replicating a regular big-box retailer – huge warehouses and all – and adding an online storefront to it. The reasoning was that given the size and dynamism of Nigeria’s market, plus the convenience of being able to purchase anything at all at the tap of a button, the market would catch on quickly, and Africa would finally have cracked e-commerce.

In reality, most entrants into the African e-commerce space who merely replicated the structure and processes of offline retailers discovered very quickly that few things are worse for a business of that description than having warehouses filled with slow-moving inventory. Jumia was the first e-commerce company in Nigeria to figure out that this model only did not work, and the company rapidly pivoted to the now-prevalent marketplace model.

Under this model, which it pioneered in Africa, Jumia acts as a broker connecting sellers and buyers on a secure, trusted platform that also collects payments on behalf of sellers. To this end, JumiaPay was developed. The metamorphosis into a marketplace model was possibly the most significant business decision ever taken in African e-commerce to date. This was key because it helped spark the realisation that a tech company operating in a retail space was and should still be, first and foremost, a tech company.

Buttressing this point while sharing some of his thoughts at the 10th-anniversary luncheon, Jumia Nigeria CEO Massimiliano Spalazzi said: “We started from a small house in Lekki, and when we started, we didn’t know what would happen next, but we knew very well what we wanted to achieve, which today still stands as the number one company value at Jumia – to improve people’s lives through the internet and to enable our vendors and logistics partners to do better and do more business together with customers.”

Taking African E-Commerce into the Future

Having discovered what did not work and fixing it rapidly, Jumia also figured out what did work in Africa’s e-commerce space. Even more interestingly, Jumia in 2019 became that rarest of rarities – an African tech startup that actually made it all the way to an IPO on the New York Stock Exchange.

In her keynote address at the event, Dr Chinyere Almona, Director-General, Lagos Chamber of Commerce and Industry, referenced Jumia’s market-leading position in Nigeria. She said: “Jumia is not only the largest e-commerce platform in Nigeria but the most innovative. […] It is great news today that the coming of Jumia into Nigeria ten years ago revolutionised and popularised e-commerce in Nigeria. The performance of Jumia has positioned the company as a leader and reference point within the industry. Your impact on the Nigerian economy is multidimensional and profound.”

Despite having clearly won the business and market dominance argument, Jumia still sees itself as a socially responsible and inclusive operation. According to numbers from Jumia Nigeria, of its over 1,000 direct employees and over 10,000 independent sales agents, women make up over 30 Per cent of its workforce and more than 51 per cent of its sellers. Indirect jobs are hundreds of thousands across the country, thanks to all of Jumia ecosystem.  Perhaps closing Africa’s gender-based economic participation gaps through e-commerce might sound very difficult, but if anyone can do it, it would probably be the company that hacked e-commerce in Africa.

What best sums up the company’s worldview can probably be surmised from Co-CEO and Co-Founder Jeremy Hodara’s comments at the 10th-anniversary luncheon: “Ten years ago, no one believed e-commerce could work, but we are here today. We don’t do everything ourselves; we do it with our partners – we are not only proud of where Jumia is but where the entire ecosystem of e-commerce is.”

The story of e-commerce in Nigeria is not close to its conclusion yet, and if the story of Jumia shows anything, it is that Africa is nothing if not a dynamic and often unpredictable market. What the story of Jumia also indicates, however, is that where others tried to conquer this space with varying degrees of success, only one entity has consistently found the answers to enable it to move forward on the road to fully integrating Africa’s consumer markets with the internet. That entity is Jumia.