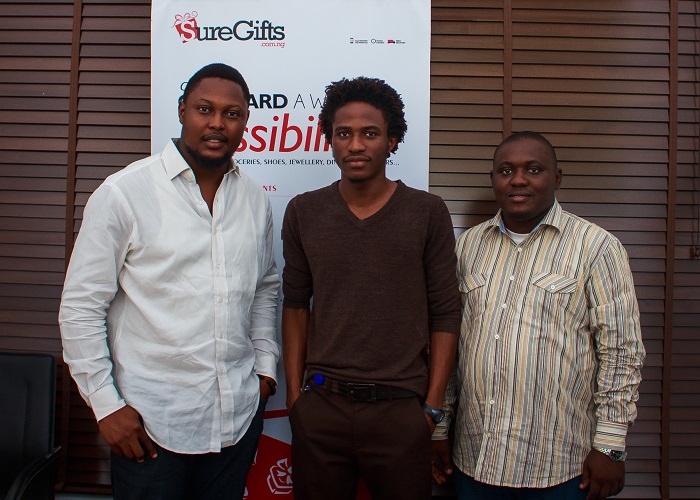 Nigerians are the biggest spenders in Africa, one of the biggest in the world. Out of their heavy consumerism emerges a strong culture of gifting. Babafemi Lawal, Olaolu Samuel-Biyi and Adeoye Ojo got insight into this trend from market data while working as analysts with Jumia, one of Nigeria’s largest online shopping malls.

This got them talking about the gifting culture in Nigeria. They also identified a problem – often, well-wishers do not know what gift their loved ones would like hence they end up purchasing cluelessly and not getting full value for their intent! To eliminate this, the trio came up with the idea of launching a gift card company that allows customers give vouchers to their loved ones which can be used to redeem gifts of their choice from merchants.

While the concept of gift cards isn’t entirely novel globally, Nigeria, Africa’s largest economy with over 170 million people, had not a single gift card company back in 2012. In the West, gift cards have grown year-on-year, estimated to become a $200 billion market by 2020 – nearly 5 percent of the American retail industry.

In 2013, While Lawal remained at Jumia, Samuel-Biyi left Jumia for an investment firm Venture Garden Group (VGG) and Adeoye for United Bank for Africa (UBA). They researched the potential of their business idea on the side while maintaining their day jobs. After a brief stint, they all resigned, secured investments from VGG and focused on Suregifts.com.ng January of 2014. Adeoye admits they had ventured into the niche business without knowing much about it, but their days with the Rocket Internet and Jumia team had prepared them well enough for Nigeria’s burgeoning e-commerce space.

“Little data exists about gift cards in emerging markets, but we just had to do it,” Olaolu quips.

Slim and exuberant, Olaolu is the most charismatic of the trio. He’s a Barbados-trained financial specialist without the decorous and strict garb of the men in suit. Babafemi Lawal is a sharp contrast – chubby, conventional and reserved, he rarely utters a word, busy looking into his Mac screen managing the business development of the company. Adeoye is in the middle spectrum of his partners’ opposing personalities. The former Jumia Marketing intelligence analyst and UBA ecommerce consultant contributes his expertise and contacts to the expansion of Suregifts’ customer base.

“People still ask us if our gift cards are greeting cards,” an amused Adeoye shares.

Interestingly, months into the business, foreigners and Africans in the diaspora – England, South Africa and Dubai particularly – began purchasing Suregifts vouchers to gift family, friends and associates within Nigeria. Another trend was beginning to emerge – more and more purchases were coming from within and outside the country for corporate purposes.

“We noticed professionals and business people wanted to reward colleagues and clients but didn’t know what to get them,” Olaoluwa says.

Charles Ojakaro, a human resource person at a leading oil company, says: “rather than dealing with the trouble of transporting tonnes of rice to staff members during the December festive season, we just handed them giftcards which they shopped online with for whatever they desired, and was delivered to their homes.”

A Port Harcourt-based employee of a leading pan-African logistics company who pleaded anonymity had racked up N76,000 in rewards for an impressive performance last year. He travelled to Lagos for the end of year party to pick up his supposed cash bonus but was surprisingly handed a gift card of equal value.

“My wife was glad the remuneration was cashless and that meant I couldn’t squander it on frivolities,” the 30-year-old says. “We had to buy groceries and a smartphone with it.”

Adeoye says there are multifaceted advantages of giftcards; chief of them is that it lets individuals and organizations give people the choice to receive gifts they really want.

“What’s the use of a company giving their employee of the month conventional corporate gifts when what he/she really wants is a full spa session to release stress? That would really thrill that employee and prompt them to work harder,” Adeoye explains.

Suregifts wants to make the art of gifting simpler and richer and it hopes to be a household name in five years. This of course isn’t impossible. If Jumia can, surely they can.