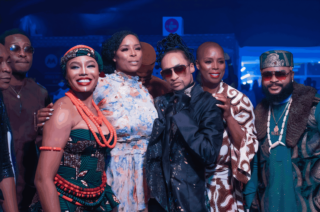 With seven editions in the bag, the AMVCA has become the African version of the Oscars. And that is not because the hosts, Ik, and AMVCA nominee, Deyemi Okanalawon, pulled a parody of the Will Smith and Chris Rock saga. Over the last nine years, the AMVCA has become the most prestigious award night for the film industry, where the most outstanding acts are recognised. It has also evolved into a night of controversial fashion displays.

However, there was another seemingly silent detail in the event: the presence of black American/Afro Latina movie stars at the event. The likes of Micheal Brandon Hall, the Smith sisters- Tasha and Sidra Smith, Bayo Akinfemi, and Grant Housley. According to a statement released by award organisers, Multichoice and Africa Magic, their participation was part of the efforts to “sustain the Africa film making and storytelling momentum, through deliberate global collaboration”.

It was neither unexpected nor unconventional to host these stars. However, with the conscious selection of just black film talents, one would wonder if a black-centred alliance is emerging. And if that happens, how this is about to affect the creative economy? Can these collaborations bridge the social distance between Africans, African Americans, and African Caribbeans?

This would not be the first attempt by the African film industry to expand. Africans have been collaborating with Hollywood for a long time. But this effort could be different. For one, Multichoice is a vital player in promoting the African film industry and has a significant global presence. The platform has physical operations in over 13 African countries, with services available in 50 countries across the continent, including Cape Verde and Madagascar. A Forbes report also recognises Multichoice as one of the fastest-growing pay-TV operators.

An upside would be the potential to attract investments to the continent. When Afrobeats made its presence felt on the global scene, it accelerated investments into the continent. One example would be when Warner Music Group (WMG) bought a majority stake in Africori. It only shows that the creative sector is a natural magnet.

As it is well known, the creative sector is a top employer. Nollywood alone employs about 15 million people, directly and indirectly. With more stories to tell, there would be more productions. Bigger productions even. From movie extras to different people handling one aspect of the film process. It also means intertwined industries like hospitality and tourism will benefit. For example, if a collaboration has its scenes shot in South Africa, Hollywood talents that come in for production would need a place to stay. Automatically, the hospitality industry benefits from such collaboration.

Finally, black communities worldwide have always traced their roots to Africa. Yet, it is not news that there have been disparities between Afro Latinas, African America, and Africans. There have been reports where African Americans and Caribbean Americans have felt disconnected from Africans. In January 2022, a Twitter space with the hashtag – secure the tribe, went viral. African Americans had come online to express how migrated Africans were stealing their jobs. As controversial as it was, it showed how unconnected both races are. More collaborations could be an opportunity to unify black people in the entertainment industry. To create a global black film cinema, so to say. From having the same award shows celebrating black excellence to exploiting the joys of having a larger unified audience. It would be a win for all industries involved.