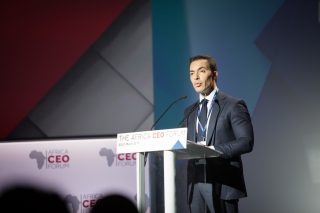 Alassane Ouattara, Jim Ovia and others to speak at the 6th edition of the Africa CEO Forum

The Africa CEO Forum 2018 is set to hold in Abidjan, Cote d’Ivoire on 26 and 27 March. This year’s edition is the 6th edition and will feature around 1200 decision makers from 60 countries. The theme for this year is “African Champions: Powering Competitiveness.”

The Africa CEO Forum is a program organized by Jeune Afrique Media Group, publishers of The Africa Report, and Rainbow Unlimited, a Swiss company that specializes in event management and the “promotion of business links between Switzerland and Africa” according to its website. This year’s edition is being co-hosted with the International Finance Corporation, a part of the World Bank Group.

Africa’s private sector has developed over the last 20 years, with many of them growing quite resistant to slow economic growth synonymous with many African countries during that period. However, compared to other emerging markets outside Africa, the number of leading private companies is small. To increase this number, African countries must tap into the unrivaled technological advancement occurring in the developed countries around the world. Despite the risks new technology pose to job creation, it aids in encouraging innovation, industrialization, better health and education systems etc.

These changes and more, are usually top of discussions at the Africa CEO Forum, with the aim being the proliferation of action plans for better business climates in African countries. The Forum will feature “twenty sessions organized by sector and region, case studies by top CEOs, success stories, strategic workshops, and themed task forces (on female leadership and young CEOs),” all with the aim of creating a new perspective of looking at the private sectors on the African continent, and to chart a new course for entrepreneurial change in Africa for the next 10 years.