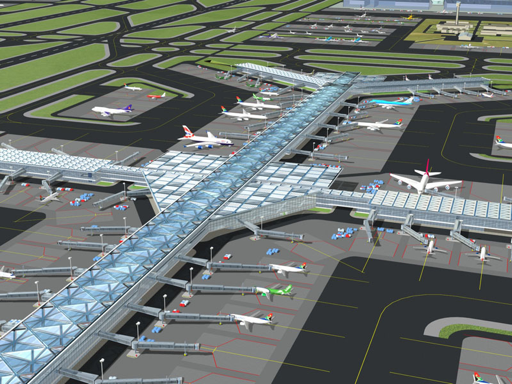 The 10 Biggest Airports In Africa

Crucial to Africa’s economic development is its infrastructure, particularly its transport network. And with the potential boon of tourism, African nations must make sure they have top quality airports to attract and deal with large numbers of visitors. Many are already in place, and here Tom Jackson takes us through a quick run down of the ten biggest airports in Africa.

The air transport hub of Southern Africa, OR Tambo caters for almost 19 million passengers each year and is Africa’s biggest and busiest airport. More than 18,000 people are employed by various companies at OR Tambo, and the airport plays a key role in the Gauteng province’s economy. The airport’s impressive infrastructure has been expanded by thousands of square metres in recent years. Part of the Airports Company South Africa (ACSA), it hosts airlines from all five continents. The airport is named as a tribute to one of South Africa’s most important founding fathers. Oliver Reginald Tambo, fondly known as O.R. by his peers, is renowned in South Africa and abroad for his significant contribution to the liberation of South Africa.

Egypt’s largest airport and the second busiest airport in Africa, with over 65 airlines using it annually.  Cairo International Airport  has three terminals and a new cargo terminal is currently under construction. 13 million passengers pass through each year. In 2010, the airport was voted one of the three most improved airports in the 2010 Skytrax World Airport Awards.

Africa’s third largest airport, Cape Town International Airport  is located approximately 20km from Cape Town city centre and serves 8.4 million passengers a year. It has established a reputation as Africa’s premier international award-winning airport, consistently performing among the best in the world in terms of customer service. The airport has also gained praise for its unique split-level design.

Also known as La Mercy Airport, King Shaka International Airport is the primary airport serving Durban, South Africa. Located approximately 35km north of the city, it opened to passengers on 1 May 2010, just over a month before the start of the 2010 FIFA World Cup. It serves 4.75 million passengers a year.

Sharm El-Sheikh Airport is the second busiest airport in Egypt after Cairo International Airport. In 2008, the Egyptian Airports Holding Company announced plans to build a third new terminal at the airport which will double its capacity from 7.5 to 15 million passengers per year. It is scheduled for completion this year.

Located 5km southwest of El Dahar, Hurghada Airport is currently served by one terminal. However, construction of a new terminal complex with an annual passenger capacity of 7.5 million is currently underway. Passengers will have access to a wide variety of stores, duty-free boutiques and restaurants.

Operated by ONDA (National Airports Office), the airport is located 30km southeast of Casablanca and is the busiest airport in Morocco with almost 7.3 million passengers passing through the airport in each year. It was named after the late Sultan Mohammed V of Morocco.

Located in Lagos, Nigeria, MMIA is the major airport serving the country, with 6.3 million passengers a year. The airport’s international terminal was modelled after Amsterdam Airport Schiphol. It officially opened in March 1979, and today it is the main base for Nigeria’s flag carrier airlines, Air Nigeria, First Nation and Arik Air.

JKIA is Kenya’s largest airport, and the busiest airport in eastern and central Africa. It is named after the first Kenyan Prime Minister and President Jomo Kenyatta. Located to the southeast of Nairobi, it is the main hub of Kenya Airways, JetLink Express and Fly540. It serves 5.8 million passengers a year.

Owned and operated by the Airports Company South Africa,  Port Elizabeth International Airport is located approximately two miles south of the city’s CBD, earning it the nickname of the “Ten minute airport”, because it is less than ten minutes’ drive from most major areas of the city.