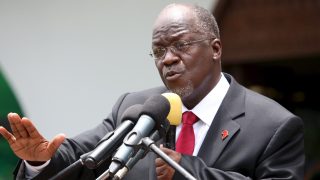 Tanzania’s President John Magufuli has often outrightly stated that a large population is equivalent to economic prosperity. He not only encourages women to “set their ovaries free” but wishes that Tanzania takes a cue from other populated countries like Nigeria.

In his words, “When you have a big population, you build the economy. That’s why China’s economy is so huge.” The leader who encourages childbirths in order to boost the economy, making it a regional powerhouse, has in the past suggested policies to implement this point.

Since taking office in 2015, President Magufuli has championed several policies towards achieving economic progress and somehow strongly believes that a higher birth rate will achieve this cause. In 2017, he called for an end to the use of contraceptive methods. “You have cattle. You are big farmers. You can feed your children. Why then resort to birth control? This is my opinion, I see no reason to control births in Tanzania,” the EastAfrican quoted the president.

While a burgeoning population appears to have turned out positively for China, African countries have shown an inability to cater for it, not to mention channelling it for economic development. Not even Tanzania, with considerably well-functioning industries, appears capable.

Before encouraging uncontrolled childbirths, the government needs to put several other factors into consideration. A country that seeks a higher population needs to make its economic growth proportional so that it can meet the demands of the growing lot. Tanzania which is currently home to about 58 million people is still faced with unemployment and a shortage of infrastructural facilities to cater for its present figures. Adding millions to the number in the next couple of years should not be considered.

A low-income state is determined by its Gross National Income (GNI) per capita. The average GNI per capita in Sub-Saharan Africa is placed at $1,709 and as of 2014, Tanzania was rated at $920. Although the East African country has recorded a seven percent growth over the years and has a target of becoming a middle-income country by 2025, it may not be ready to accommodate a huge population increase.