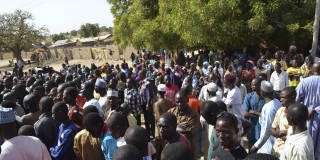 The Tanzanian government announced on Sunday, January 2, 2020, that at least twenty people were killed and about a dozen others injured in a mass stampede during a church meeting in the northern Tanzanian city of Moshi.

The incident happened on Saturday night while hundreds of worshippers were attending a prayer ceremony led by Boniface Mwamposa, a popular preacher who leads the Arise and Shine Ministry Tanzania.

According to witnesses and officials, the stampede occurred when Mwamposa poured “blessed oil” on the ground and a huge portion of the crowd rushed towards the oil with the hope to be cured of their ailments and likewise help them acquire a financial fortune.

Kippi Warioba, Moshi district commissioner affirming the cause of the stampede told Reuters by telephone that it “occurred when the worshippers were rushing to get anointed with blessed oil.” He added that a total of “twenty people died and 16 others were injured in the incident.” with five children amongst the dead.

A 2010 survey by the US-based Pew Research Center revealed that religion has deep roots in the African community. The survey stated that “the vast majority of people in many Africa’s nations are deeply committed to the practices and major tenets of Christianity and Islam.” The survey reports that 87 percent of Nigerians claimed that religion is very important in their lives.

However, these religions tend to engage in inhumane practices that put their followers most especially the gullible ones at risk. Some of these inhumane practices include when a South African preacher made his congregants eat grass “to be closer to God” before stamping on them in September 2014.

Similarly, a preacher in Kenya persuaded his female members to come for Sunday service without any underwear “to be closer to God”. In Nigeria, a 53-year-old pastor was arrested for impregnating more than 20 members of his congregation, including married women and young girls.

Across Africa, there has been a rise in the number of pastors who claim they have special powers and can perform “miracles.” As such, most of these preachers take advantage of people dealing with various challenges ranging from critical illnesses and childlessness to poverty as a result of ignorance.

Across Africa, there have been cases of a mass stampede in countries like Nigeria, Zimbabwe, Zambia, and South Africa resulting from outrageous religious activities in churches. In 2019, three people were killed in a stampede at a South African church during a service led by Shepherd Bushiri, Africa’s wealthiest preacher.

With cases of such tragedies on the rise, the Tanzanian government should consider regulating faith-based organizations across the country. Strict measures and requirements like appropriate infrastructure, safety, hygiene, and theological degrees from preachers should be a necessity before one can operate a religious or faith-based organization in Tanzania. Similarly, religious leaders who engage in barbaric and inhumane activities need to be prosecuted.