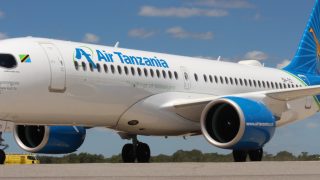 An aircraft belonging to Tanzania’s state carrier, Air Tanzania, which was impounded by Canada in November has been released, President John Magufuli has said.

The aircraft had been seized after a case was filed in Canada against Dodoma by a retired South African farmer, Hermanus Steyn. The plaintiff was “seeking compensation for a farm and other properties that was nationalized in the 1980s,” Foreign Affairs Minister Palamagamba Kabudi said.

After the seizure of the plane which was due for delivery last month, Kabudi had threatened to pull out of aircraft deals with Canada in protest of the move by the Northern American country.

Without disclosing the details that led to the release nor the date it would be delivered, the president on Thursday revealed that the Bombardier Q400 aircraft would be received in Mwanza.

The aircraft, built by Canada’s De Havilland company, was the second of Tanzanian planes to be seized in connection with the farmers’ case built on a contentious $33 million debt.

Back in August, South Africa seized an Airbus 220-300 aircraft owned by Air Tanzania. The plane had been prevented from taking off from Johannesburg based on a court injunction.

Reports showed that the plane was forced to cancel its flight from Oliver Tambo International Airport in Johannesburg to Dar es Salaam following an order issued by the Gauteng High Court.

Demonstrations were staged against the South African embassy in Tanzania, with Dar’s riot police deployed to disperse protesters demanding the release of the Air Tanzania plane. The plane was then released in September after a South African court overruled the earlier decision impounding the aircraft.

In addition to the seizures by South Africa and Canada over the retired farmer’s case, Tanzania has had three cases of aircraft seizure in recent times.

Canadian construction firm Stirling Civil Engineering Ltd in 2017 filed a court order to seize one of Air Tanzania’s new Q400s in Canada before it could be delivered. The claim stemmed from a ruling in 2010 that awarded the company $38 million for a road contract that was terminated by Dar.