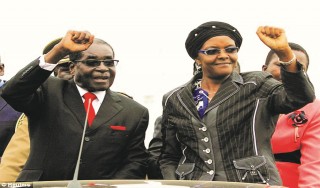 Tales from Zimbabwe: Mugabe is a “living spirit” and his wife, a “national disaster.”

“In my culture, you don’t raise a finger to a man or a woman who is your mother or your grandfather’s age. It is spiritual, he is now a living spirit and we are lucky to have him alive,” said Joice Mujuru, former vice president of Zimbabwe and leader of the Zimbabwe People First (ZPF) party, in reference to President Robert Mugabe.

“If you want to talk to your departed grandfather, you talk to them through him and you don’t have to wrong him, because at his age, he is just there to sit around and be respected as a living spirit,” Mujuru added during an interview.

Mugabe’s former protégé and VP, who currently heads a major opposition party, was responding to criticism about her leniency. So far, Joice Mujuru’s comments have caused quite a stir in Zimbabwe, as members of the ruling ZANU-PF termed it an attack on President Mugabe.

Jonathan Moyo, Zimbabwe’s secretary of science and technology, called the interview “embarrassing” and remarked that Mujuru had “no leadership material” on Twitter. “Without the late General Mujuru and President Mugabe, Joice is politically nothing,” he reportedly tweeted. Eddie Cross, a member of the opposition Movement for Democratic Change (MDC) party, said most Zimbabweans consider any criticism against Mugabe “a criminal offence.”

Mujuru also insinuated that Mugabe was unfit to rule by saying he is unfit to cater to even animals –“goats” or make “serious family decisions.” In reaction, some pro-Mugabe analysts said Mujuru was nothing but a pawn of foreign interest, with words intended to deceive and calculated to placate imperialist efforts.

A few days later, a police officer was thrown in jail for making a similar statement to Mujuru’s. The police officer, Thompson Joseph Mloyi, said Mugabe was too old to govern, and that his wife, Grace Mugabe, is a prostitute.

On Tuesday, Mloyi was arraigned in court on charges of undermining the authority of, or insulting the Office of the President. And later released on a $100 bail pending trial on Tuesday next week. Mloyi is said to have started yelling “insults” on the president and the first lady without being provoked, at the Cranborne Barracks, and only retreated once other officers confronted him.

While Mloyi’s outburst may come across as implausible, it may have been his response to Grace Mugabe’s speech during her Mashonaland Central rally in Chiweshe last month. The 50-year old had lashed out on critics saying, “Handisi hure raMugabe (I am not Mugabe’s whore),” her statement and conduct at the rally earned her more criticism with media platform, News Day, calling her a “national disaster.” “If Grace’s conduct is a barometer for cultured dignity, then the obvious conclusion is that she has none,” said writer, Maynard Manyowa.

As a former secretary and mistress of President Mugabe, Grace left her husband for Mugabe in 1996 after the death of his first wife. Since then, she has been labelled a prostitute for courting Mugabe while his wife was still alive and while she was still married to her previous husband.

Just like her husband, Grace has become quite the controversial figure in Zimbabwe’s political scene. A firm supporter of her husband, she has constantly reiterated that her husband will remain in power for as long as possible, even if it meant pushing him around in a wheel chair should he become incapacitated by old age. President Mugabe has been leading Zimbabwe for 36 years now, first as a Prime Minister, then President.