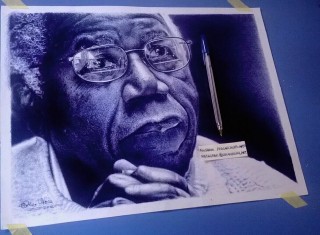 It is obvious that the genre of hyperrealism and photorealism is increasingly gaining ground among young African artists, as brilliant portraits of talented artists emerge daily. One of such artists is Oscar Ukonu, a self-taught Nigerian artist who draws with a ballpoint pen.

Ukonu who began drawing at the age of nine, says he deviated from mainstream graphite pencils to using a biro in 2014 because it felt more comfortable for him. “With photorealism as my genre of art, the ballpen’s definite and steady feature gives me more control than any other material,” he told CP-Africa.

His meticulously detailed portraits are borne out of days of intense study of his subjects; a technique he says helps him connect with his subject and over a hundred hours of execution. Ukonu says studying his subjects for days gives him a foresight of the end result even before he begins drawing. The technique also gives him an added ability to draw from memory.

Here are a few of his photo-realistic drawings: