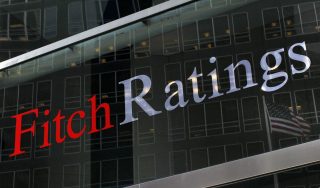 American financial and credit rating company Fitch has hinted that a sharp rise in Nigeria’s debt and an expanding financing margin might trigger a lower rating, as policymakers in the country are struggling to deal with the turbulence from coronavirus corollary on oil price crash.

During an interview with the Reuter news agency, Mahmoud Harb, the sovereign rating director at Fitch said “We have two elements that could lead us to take a negative rating action/downgrade on Nigeria. Aggravation of external liquidity pressures and a sharp rise in government debt to revenues ratio.”

Mahmoud also hinted that the debt to revenue ratio of the country is bound to get worse at 538% by the end of 2020, last year it was 348%. However, Mahmoud said there would be a slight improvement next year.

On Fitch’s parameters, the medium debt ratio for “B” rated countries is 350%.

According to Fitch’s estimate, the African giant would need $23 billion to meet its external financing needs for the year, but the country is strangled with few options like running down its reserves, after shelving plans to issue Eurobonds.

In Harb’s opinion, Nigeria’s foreign reserve could drop from $36.57 billion to $23.3 billion this year, if foreign exchange access is normalized.

Nigeria’s economy is at a crossroad, ranging issues from falling oil prices to unforeseen impacts of COVID-19, that forced the president Buhari’s administration into more loan acquisition.

Amongst other sovereign loans and credit servicing, a loan was acquired last April, which was an emergency loan of $3.4 billion from the International Monetary Fund, to address COVID-related economic issues.

Furthermore, the government has adopted various measures to cushion the jabs from the pandemic on the initially wobbling economy. A noticeable one is a tight restriction on foreign exchange in financial institutions across the country.

Fitch disclosed that for Nigeria to avoid a downgrade in rating, it would have to strengthen its finances and reforms on forex policy while reducing its deficit by boosting non-oil revenues.

It would be recalled that last April, the ranking agency downgraded Nigeria to B with a negative outlook from “B+” which cities aggravation of pressure on external finances.

Additionally, the agency stated that the country might experience lower ranking if the government was incapable of addressing the damages to its revenue and balance sheet.