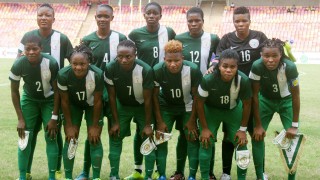 The Super Falcons of Nigeria went into the African Women’s Cup of Nations competition with the expectations of providing Nigerians succour following lacklustre performances by the male under-17 team at the Suwon Invitational Tourney and the female under-20 team which crashed out at the group stage of the female U-20 World Cup in Papua New Guinea. With a team having players in their best possible shapes, and with a heavyweight women footballing nation, Equatorial Guinea, out of the way, it appeared the Super Falcons would have little or no excuse for failure at the tourney. It happened that they were not looking for any as they have qualified for the final of the completion after defeating the Bayana Bayana of South Africa by a lone goal. It has been a beautiful journey for the Super Falcons.

The defending champions kick-started their campaign in the best possible way with a thumping 6-nil annihilation of Mali in the group B opening game with reigning African female footballer of the year, Asisat Oshoala scoring four goals. The Super Falcons played so well a section of the fans was left disappointed as they felt the score line did not adequately reflect the performance of the falcons on the pitch. It was a game they could have won by a higher margin.

The momentum gained by the enormous score line in the first match was dealt a blow when the Super Falcons were held to a 1-1 draw by the Black Queens of Ghana. The reigning champions were pegged back from the penalty spot having gone ahead in the 19th minute through playmaker Asisat Oshoala for her fifth goal of the campaign.

The Nigeria team were back to their best as they put four goals past Kenya in their last group game to set up a semi-final clash with the Bayana Bayana of South Africa. Ngozi Okobi opened the scoring when she powered home a shot from the edge of the 18-yard box. Defender Faith Ikidi doubled the tally minutes later when she headed a wonderful cross into the top corner and out of the reach of the Kenyan goalkeeper. Tournament top scorer, Asisat Oshoala scored her sixth goal of the tournament and Nigeria’s third of the match almost immediately after the restart. The game was sealed when substitute Desire Oparanozie slotted home a cross in the 91st to ensure Nigeria finish top of group B.

The semi-final clash with Bayana Bayana proved to be Nigeria’s toughest game of the tournament as they were only able to put a goal past the South African team. Nigeria’s lone goal was scored after the restart through striker Desire Oparanozie who sent a bullet shot from a free kick at the edge of the area beyond the reach of the South African goalkeeper. The goal proved sufficient even though the South Africans almost fought their way back into the game on numerous occasions. The Super Falcons will now meet tournament host, the Indomitable Lionesses of Cameroon, who defeated the Black Queens of Ghana by a lone goal in the second semi-final, in the final on Saturday December 2nd, 2016.

Nigerian will be appearing at a record 10th finals, and hoping to win the trophy for the 10th time having won the title on nine occasions. Nigeria won their 9th title at the last edition of the competition in Windhoek, Namibia. They have won the trophy in each of the times they played the final. The final match of this year’s competition will be played at the Stade Ahmadou Ahidjo stadium in Yaounde.