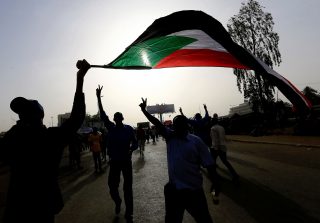 Washington has said it intends to remove Sudan from a list of state sponsors of terrorism on the condition that Khartoum pays compensation to Americans that were victimized in terror attacks aided by the African nation.

According to a report, President Donald Trump revealed via a tweet that the new Sudanese government had agreed to pay $335 million to the United States terror victims and families. “Once deposited, I will lift Sudan from the State Sponsors of Terrorism list. At long last, JUSTICE for the American people and BIG step for Sudan!” Trump tweeted.

The State Sponsors of Terrorism list, created in 1979 by the U.S. government, is used to designate those countries that have “repeatedly provided support for acts of international terrorism.” In a 1994 report, about a year after Sudan was added to the list, the State Department explained that “despite several warnings to cease supporting radical extremists, the Sudanese government continued to harbor international terrorist groups in Sudan.”

Sudan was famous for being a safe haven for high profile terrorists like Osama bin Laden, Carlos the Jackal, and Abu Nidal. It fully accommodated multiple Islamic terrorist groups during the long-term government of ousted President Omar Al Bashir – including the Abu Nidal Organization, the Palestinian HAMAS, the Palestinian Islamic Jihad, the Lebanese Hizballah, and Egypt’s al Gama’at al-Islamiyya.

The country served as a convenient transit point and meeting site for Iranian-backed extremist groups. In 2003, the Western Darfur genocide which affected about 3 million people and claimed between 80,000 and 500,000 lives further rooted Sudan on the U.S. state terror list.

Limited access to foreign currency for the importation of wheat however triggered widespread protests that ended the three-decade rule of Al Bashir. Since 1999, the oil sector had driven much of Sudan’s gross domestic product growth but the oil-rich nation has recorded poor sales in crude so far this year as global oil prices crashed due to the coronavirus pandemic.

According to a review, the removal of Sudan from the terror list will have only a marginal impact on the near-term economic crisis the country faces. There are also doubts about whether it can meet the agreed $335 million payment to the U.S. If it does, there is no doubt the removal would boost Sudan’s long-term recovery alongside hopes of ushering in an entirely civilian-led, democratic regime.